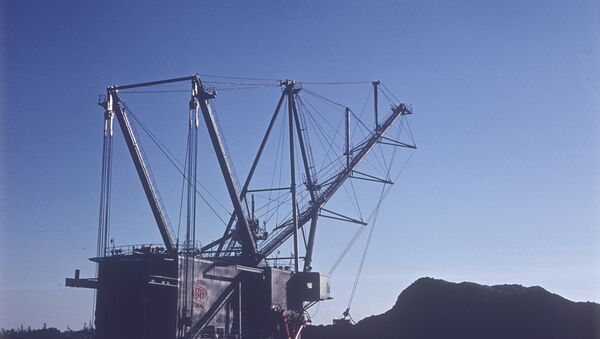 MOSCOW, November 8 (RIA Novosti) — China is estimated to hold the largest technically recoverable shale gas reserves globally, yet extracting it is too complicated and costly to replicate the US shale gas revolution.

China, the largest energy consumer in the world, hopes to become less dependent on energy imports. However, Beijing needs to increase its domestic volumes of energy resources in order to sustain its growing economy. Concomitantly, China has to address the environmental implications of using coal. Shale gas extraction is seen as a viable substitute to alleviate such problems as evident from the US experience. The United States, once dependent on energy imports, has been transformed into a major energy superpower following the shale gas revolution.

In 2013, the US Energy Information Administration issued a report stating China has 1,115 trillion cubic feet of shale gas, twice as much as the US. It singled out seven prospective basins with abundant shale gas and shale oil reserves the country could develop.

But despite enormous resource potential, China so far has not managed to replicate the US success. The Chinese shale industry has not been developing as fast as Beijing hoped. China is “working diligently to provide an investment environment conducive to shale development, but given rising domestic demand and a challenging exploration environment, it is unlikely to become a shale exporter,” Deloitte said in a 2013 report.

The primary reason for that is geology. In China, the formations holding shale gas are located in challenging mountainous terrain. Moreover, those areas, primarily in the north of the country, lack the needed water resources, meaning the reserves are difficult and expensive to extract. By comparison, in the US shale gas is mainly extracted in the flatlands of Texas, North Dakota, and Pennsylvania, where there is abundant supplies of water required for hydraulic fracturing.

Further complicating the issue is the fact that a few state-owned Chinese companies control much of the gas and pipeline infrastructure in the country. Besides, shale gas extraction employs sophisticated drilling technology used to inject water and chemicals into the rocks so that the gas can be freed. China does not have the know-how to extract the gas and largely depends on foreign technology in the field.

In 2012, China’s National Energy Administration (NEA) projected that by 2020 the country would receive from 60 to 80 billion cubic meters (bcm) of domestic shale gas annually. In August, Wu Xinxiong, NEA’s chief, announced the target was reduced to 30 billion bcm considering the challenges of shale gas extraction. “The previous targets were more of a vague prospect, a hope. 30 bcm is a more realistic goal,” an unnamed government source told Reuters.

Thus far China has identified only one prospective shale gas field, Fuling in Sichuan province. It is projected to produce 10 bcm annually by 2017, according to Sinopec, the state-owned corporation developing the well. “This marks an important strategic breakthrough in China’s shale gas development and signifies the country’s earlier-than-expected entry into the large-scale commercial development phase. This encouraging progress will play a significant role in accelerating the structural adjustment of China’s energy industry, relieving pressure on natural gas supplies from central and eastern China, and promoting energy conservation and emission reduction, as well as air pollution control,” Sinopec stated in a press release.

But China still has to produce an additional 20 bcm to meet NEA’s reduced target for 2020. Yet no other shale gas fields are developed at the moment.

“The ‘shale gas revolution’ that swept across the U.S. is unlikely to be repeated in China by 2020, particularly because of water scarcity and land rights bottlenecks. China should be realistic about its shale development outlook and commit to take effective actions to address the various environmental, technological and regulatory challenges,” analyst Ella Chou stated in 2013.

Anthony Fensom echoed such sentiment in an article published in the National Interest: “The United States took two decades to achieve its “overnight” success in shale gas. For China, the shale revolution will not be delivered any more quickly, making imported LNG crucial until its shale industry picks up speed.”

Dissatisfied with the current progress on shale exploration, Chinese authorities have imposed fines on companies, including Sinopec, for failing to fulfill their commitments, Forbes reported November 4.