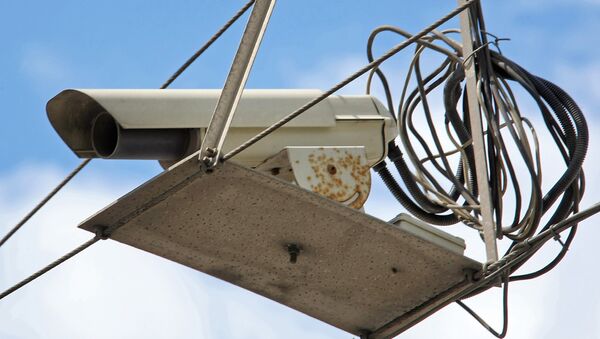 © Sputnik / Ruslan Krivobok
/
Go to the photo bank
Subscribe
As police in both the US and Canada implement innovative investigation technology, civil activists express concerns over their improper use for spying.

Calgary police service is intending to commence the practical use of facial recognition software this month, called Neo Face Reveal. The innovative program provides the opportunity to compare visual imagery from a crime scene with mug shots in the police database, according to a CBCNews Calgary report. Police officers will be equipped with body cameras that will gather photographic and video content to be processed later. Such a decision has triggered concerns from a Canadian privacy watchdog, which contends that the use of such tech may infringe civil rights, as well as violate the Freedom of Information and Protection of Privacy Act, as reported by Metro.

Canadian Privacy commissioner Jill Clayton alleges that some CPS personnel, or the whole police organization may start gathering visual data of citizens’ movements and actions at any particular period of time instead of using the new tech solely when investigating already committed crimes, as CPS claims. “I have questions regarding how CPS is implementing these technologies, and specifically what steps have been taken to ensure privacy and security risks have been identified and addressed,” she said, as quoted by Metro.

However, Clayton’s principal claim to CPS is that Calgary police had not consulted her prior to implementing the new technology. “We had a number of calls when the Edmonton Police Service went ahead with a pilot project to look at body-worn cameras,” Clayton said. “They had actually submitted a Privacy Impact Assessment (PIA) to our office and consulted with our office on some of the privacy implications associated with this new technology.” She claims that CPS has not had similar communication with her office.

Calgary police say the use of such tech will not be in violation of civil liberties despite the controversy. “We have built in and engineered all of these systems the – body worn camera and the facial recognition – with those privacy considerations,” CPS said in a statement as quoted by Global News. The police say, the data will be collected only by uniformed officers and kept in the police database for 13 months at which point it will be erased, if not requested by the court. Anyone caught on camera will be able to apply to view the content under the freedom of information act.

Clayton intends to determine how accurate facial matches are between random people and police mug shots. She is also exploring the training of the police officers who will wear the body worn cameras.

Anil Jain of Michigan State University stated that “the performance of face recognition systems depend on the ‘quality’ (pose, illumination, resolution, expression) of the acquired image," as quoted by Ars Technica blog. However, body worn cameras provide low quality visual material, which suggests the Neo Face Reveal software may produce incorrect matches and perhaps engender criminal charges and penalties against the innocent.

The recent controversy around the CPS facial recognition tech has drawn comparison with US domestic drone use and license plate police scanning and tracking technologies. While drones are known as deadly combat weapons and are mainly used to eliminate terrorists in the Middle East and elsewhere, they are increasingly becoming utilized as an effective tool for domestic surveillance. For example, the LAPD has had drones since May, but their use has been postponed until the city council outlines the respective regulations. Similarly, a Seattle PD drone program had been dumped in 2013 due to civil protests over privacy and security concerns. However, according to an Uprising Radio report, the US Customs and Border Protection Agency has long been conducting drone surveillance flights over the US. Civil activists are concerned with the alleged drone spying against them, as the unmanned aircraft may be gathering personal data.

The principal concern of civil activists is that tech like drones, or Neo Face Reveal may be used to remotely identify people not related to any criminal activity, which is equated to an unjustified search in terms of law. Accessing individual’s personal data without their consent may violate the law and infringe on civil liberties guaranteed in the Constitution. While these new opportunities may be abused by ill-minded lawmen, no regulation can completely guarantee the safety of personal data, since prohibiting the use of the new tech would be improvident. Technical progress cannot be stopped.  The only way to protect personal data therefore is up to individuals. New challenges must be met with relevant responses. For example, facial recognition equipment can be manipulated by Marilyn Manson-esque makeup, as suggested by a New York-based artist. License plates can be covered with a thick layer of hairspray, rendering them impossible to read by scanners. Drones can be deceived using electromagnetic interference devices. Eventually, it is only the practical measures that matter.

Drone use for non-military purposes may also have an adverse effect when civilian-operated drones collect data related to national security. Recently the New York Times reported on two French men and a woman who flew two drones over an atomic power station. The three have been detained and questioned; the woman had later been released. French authorities have been concerned with drone flights over the nation’s nuclear plants, as there have been about 14 such incidents recently. It is still unknown who had operated these civil drones and whether they were coordinated by a single entity.

All in all, innovative technologies such as drones and facial recognition software are a menace to not only our individual freedom, but to national security as well. More transparency and comprehensive dialogue between governments and their citizens might be helpful, as deepening distrust may impede technological progress.