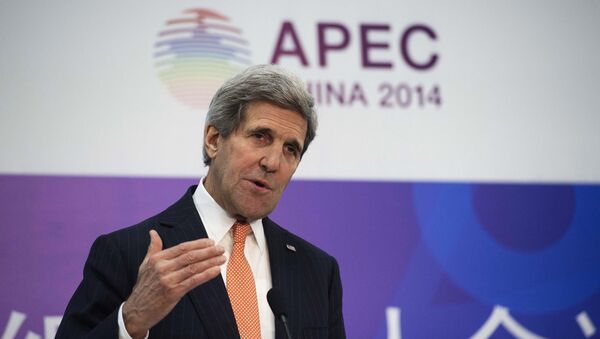 © REUTERS / Nicholas Kamm/Pool
Subscribe
US Secretary of State Kerry voiced hope that the deal on Iran’s nuclear program would be reached “over the course of next weeks.”

BEIJING, November 8 (RIA Novosti) — Russia has shown itself as a constructive and serious partner in the international efforts to settle the Iranian nuclear issue, US Secretary of State John Kerry said Saturday after his meeting with Russian Foreign Minister Sergei Lavrov on the sidelines of the Asian-Pacific Economic Cooperation (APEC) Summit in Beijing.

“With respect to Iran, Russia has been a constructive, engaged, serious partner in the effort to try to find a solution to the problem,” John Kerry told journalists.

US Secretary of State voiced hope that the deal on Iran’s nuclear program would be reached “over the course of next weeks.”

Earlier on Saturday Sergei Lavrov also stated that Russia and the United States were determined to do their best to reach an agreement on Iran's nuclear program before November 24.

The Iranian nuclear issue is one of the major topics to be discussed at the APEC summit, ahead of the upcoming P5+1 group talks with Tehran scheduled to take place on November 11 in Muscat, Oman. The P5+1 group consists of Russia, the United States, the United Kingdom, France, Germany and China.

The West and Israel have accused Iran of attempting to develop a nuclear weapon under the guise of a civilian nuclear program, while Tehran argues that its nuclear development is aimed purely at meeting the country's growing energy needs and achieving other peaceful goals.

The deal on an Iranian nuclear program was initially supposed to be reached by July 2014, but the deadline for the agreement was later postponed to November.