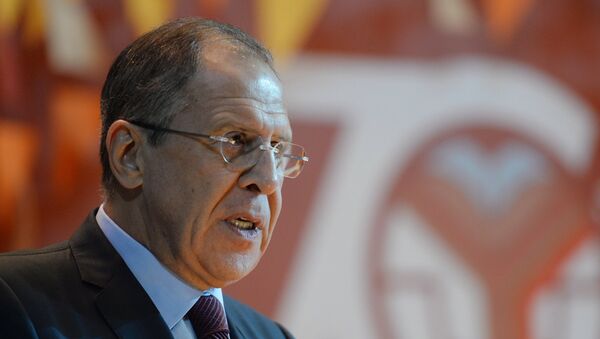 © Sputnik / Mikhail Voskresensky
/
Go to the photo bank
Subscribe
Russian Foreign Minister Sergei Lavrov noted that the ceasefire agreement was signed between the militia and the Ukrainian government, and it is them who must finish this process, which is what they are doing at the current moment.

"The ceasefire agreement was signed between the militia and the Ukrainian government, and it is them who must finish this process, which is what they are doing at the current moment," Lavrov said.

The Russian Foreign Minister, who has arrived in Beijing for the Asia-Pacific Economic Cooperation (APEC) summit, also stressed that Russia never sent its troops to eastern Ukraine, despite Kiev's allegations to the contrary, which have not been supported by any evidence.

Lavrov emphasized that even the US State Department has admitted that it has not received any information confirming the alleged crossing of the Ukrainian border by Russian artillery or tanks.

On Friday, US State Department spokesperson Jen Psaki told reporters that Washington does not have independent confirmation of Kiev's claims that Russian tanks and artillery have allegedly moved into the Luhansk region.

Also on Friday, Pentagon Press Secretary Rear Adm. John Kirby said at a press briefing that there was no "independent operational reporting" that would confirm the claims.

Since the beginning of the military conflict in eastern Ukraine in April, Kiev and the West have repeatedly accused Russia of intervening in the Ukrainian crisis, going as far as to claim that Moscow has sent troops and weapons to independence supporters in the Donetsk and Luhansk regions. However, the United States and its partners have never supported their accusations with any evidence.