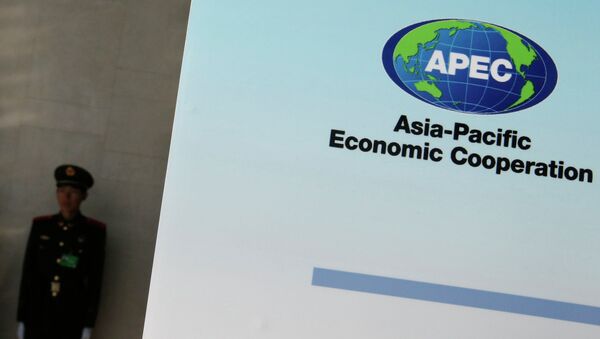 © REUTERS / Kim Kyung-Hoon
Subscribe
Experts claim that a number of meetings of particular significance given the current shifts in geopolitics to be held early next week as the leaders of 21 nations gather in Beijing for the Asia-Pacific Economic Cooperation summit.

This year the APEC leaders' summit is expected to see the first ever bilateral meeting of Japan's Abe and China's Xi, and this is why it will be so important, James Brown, professor with Temple University told RIA Novosti.

"The meeting between Xi and Abe is deemed so important because it will be their first," Brown explained. "Despite Abe having come to power in 2012 and Xi in 2013, and although the two have attended several of the same international events, they have yet to hold an official meeting."

Moreover, he recalled that the two countries are in a tense territorial dispute over the Senkaku/Diaoyu Islands in the East China Sea.

"Without established lines of communication between the countries' leaders, there is the greater risk that a naval confrontation over the islands could escalate into a more damaging conflict," Brown said.

Jamie Metzl, senior fellow at the Atlantic Council said that the most significant aspect of the meeting will be decreased rhetoric in bilateral relations.

"For the last two years China has been extremely aggressive in its behavior, particularly in the South and East China Seas and I think now China is going to be falling back a bit on its aggressive tone, so we will see a number of indications on the improved relations particularly with Japan," Metzl told RIA Novosti.

He explained that the summit in Beijing is the first large international meeting for the new Chinese leader therefore would be important not just for "what happens at the meetings themselves, but also for what will happen outside of the meetings, including meetings with President Putin and Xi Jinping and Abe."

The meeting between Beijing and Tokyo is also a result of the significant progress made recently, as both sides agreed to disagree over their territorial dispute in the East China Sea.

The meeting of Russian President Vladimir Putin and Japanese Prime Minister Shinzo Abe is another potentially momentous meeting at the APEC summit.

Brown pointed out that between mid-2011 and early 2014 there had been a marked improvement in relations between Japan and Russia, including an expansion in energy trade, growing security ties, and good personal relations between Putin and Abe.

"This changed, however, in April 2014 when the Japanese side opted to follow its US ally in introducing sanctions against Russia in response to Moscow's involvement in the Ukraine crisis. These sanctions, and those that followed from Japan, were relatively weak, yet they had the effect of freezing progress in Russian-Japanese relations. The hope is that an official meeting between Putin and Abe at the APEC Summit this month could set bilateral relations back on their previously positive course," Brown told RIA Novosti.

Jamie Metzl agreed that the meeting could be significant.

"As you know Japan has reconfigured its military to be less focused on defending [itself] from Russia, and more focused on defending itself from China. So that could potentially create some opening or communication, but there are still divisions between Japan and Russia over the Kuril Islands and other issues," Metzl said.

Speaking about Sino-Russian relationship, Jamie Metzl pointed out that bilateral ties are deepening leading to change in the landscape of global politics.

"So we are seeing in some way a reconfiguration of global politics, where Putin and Russia are moving away from Europe and closer to China. And we will see at this meeting whether the Putin-Xi connection will continue to deepen," Metzl said.

"China is using its hosting of the APEC Summit this year to showcase yet again its emergence as a leading global economic power," Brown told RIA Novosti. "More generally, the key Chinese geopolitical aspirations in the region are to maintain a stable international environment that will help to support the continued growth of the Chinese economy."

But China's economic powerhouse is justifying its desire to play a more important role at least in the Asia-Pacific region.

"In many ways China has earned that right, because of their spectacular economic rise," Jamie Metzl said. "But as China rises, they will also have greater responsibilities to support an international system that supports everybody. And now an important transition that China will need to make from being more self-interested to being more concerned with creating a regional and ultimately global order that benefits everyone."