Rompuy Confirms Stepping Down as European Council President on December 1 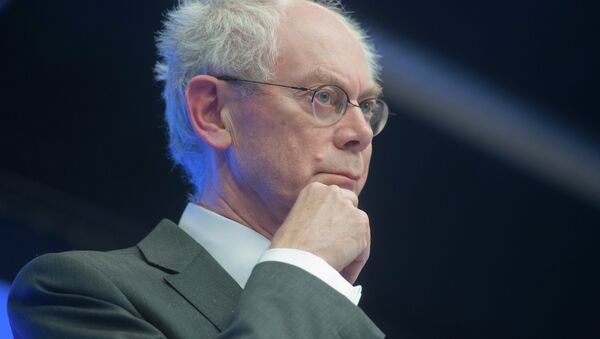 © RIA Novosti . Sergei Guneyev
/
Go to the mediabank
Subscribe
International
India
Africa
The crisis in Ukraine, according to Herman Van Rompuy, is going to be the main challenge for his successor.

"My political career will end on 1 December, creating time to pursue other activities I have been putting off," Rompuy told European Parliament representatives.

"I will teach in Louvain-la-Neuve in French and at the College of Europe in English. I will also give speeches on topics that interest me. I look forward to it, but of course I will also miss my political life in Belgium and Europe. I am very grateful that I was allowed to take up this role," he added, commenting on his plans for future.

Looking back at his term in the office, Rompuy cited overcoming the euro zone crisis and reaching an agreement on reducing greenhouse gas emissions among his main achievements.

The crisis in Ukraine, according to Rompuy, is going to be the main challenge for his successor.

Van Rompuy occupied the post of president of the European Council since December 1, 2009. The incoming president is Donald Tusk, former Polish prime minister.