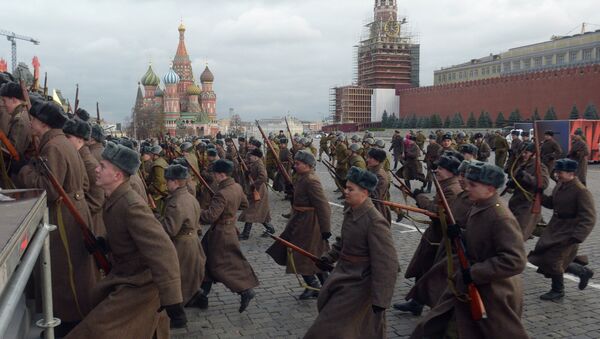 © RIA Novosti . Grigoriy Sisoev
/
Go to the photo bank
Subscribe
The story of the November 7, 1941, military parade on Moscow’s Red Square in commemoration of the 24th anniversary of the Great October Socialist Revolution will forever be remembered.

MOSCOW, November 7 (RIA Novosti) – More than 6,000 Russian soldiers marched Friday through Red Square commemorating the anniversary of a historic military parade staged in Moscow in 1941 to mark the October Revolution.

The story of the November 7, 1941, military parade on Moscow’s Red Square in commemoration of the 24th anniversary of the Great October Socialist Revolution, held in the middle of a blizzard and with some German forces a mere 30 kilometers from the city gates, will forever be remembered.

In the autumn of 1941, the destiny of the USSR hung in the balance at the gates of Moscow. At that time, Soviet forces were engaged in a heavy battle defending their positions from the German Wehrmacht. In some sectors, German units were deployed 30 km from central Moscow. On November 7, 1941, Moscow’s Red Square hosted a military parade to boost troop and civilian morale. The event was comparable to a large-scale military operation in this respect, because it convinced the entire world that Moscow remained unvanquished, and that the Red Army would continue to fight the enemy.

On November 6, the Mayakovskaya metro station hosted an official meeting dedicated to the 24th anniversary of the Great October Socialist Revolution. After the meeting, Josef Stalin told other top leaders of the All-Union Communist Party (Bolsheviks) – VKP (b) to hold a military parade on Red Square. Commanders of military units selected for the parade learned about the start time at 11 p.m. on November 6 and workforce representatives were immediately notified. Unprecedented security measures were also introduced, and the start time of the parade was shifted from the customary 10 a.m. to 8 a.m.

The organizers were worried about possible Luftwaffe strikes aiming to kill top Soviet leaders. They were also concerned that Soviet leaders might be wounded accidentally by fragments of anti-aircraft gun shells. As a precaution, the Soviet Air Force launched preemptive strikes against enemy airfields beginning November 5.

On November 6, the military meteorological service predicted heavy snowfalls and a blizzard for November 7, and there would be no threat from the Luftwaffe.

Not a single German warplane reached Red Square on November 7. 550 Soviet fighters were re-deployed from the front in order to provide air cover for the parade. The very next day, the media reported that elements of the 6th Fighter Corps and Moscow’s air-defense units had downed 34 enemy aircraft.

As there was a shortage of troops for the upcoming parade, some Red Army units were re-deployed from the front to Moscow. Military school cadets and cavalry units were also scheduled to take part in the parade. In the early hours of November 7, on Stalin’s orders, the covers were removed from the red stars on the towers of Moscow’s Kremlin, and all camouflage was removed from the Lenin Mausoleum.

At 7:50 a.m., Stalin and members of the Soviet Government in Moscow lined up on the rostrum of the Lenin Mausoleum. Army General Georgy Zhukov remained at the main command center. At 8 a.m., the solemn voice of a radio station announcer blared through all loudspeakers, which had been working day and night throughout the entire war. He said: “All radio stations of the Soviet Union are broadcasting. The Central Moscow Radio Station is beginning to broadcast the Red Army parade on Red Square, dedicated to the 24th anniversary of the Great October Socialist Revolution…” Lieutenant General and Chief of the Moscow Garrison Pavel Artemyev commanded the parade, with Marshal of the Soviet Union Semyon Budyonny inspecting it.

At 8 a.m., Marshal Budyonny rode on horseback from the Spasskaya (Savior) Tower’s gate. After hearing a report from General Artemyev and reviewing the troops, Budyonny mounted the rostrum of the Lenin Mausoleum. After that, Josef Stalin, Chairman of the State Defense Committee, Commander in Chief of the Soviet Armed Forces and People’s Commissar (Minister) of Defense, addressed the nation and the troops. He spoke of successes during the ongoing Battle of Moscow.

Enemy forces had been stopped in some sectors, the situation was about to stabilize, and the Germans were starting to dig in. The enemy had failed to achieve the main goals of Operation Typhoon, the codename for the German effort to seize Moscow using Blitzkrieg tactics.

Cadets from an artillery school were the first to march through Red Square, followed by other artillery, infantry, air-defense and naval units, with banners unfurled, to the strains of revolutionary marches performed by the Band of the Headquarters of the Moscow Military District. The orchestra was conducted by Vasily Agapkin, the composer of the famous march, “Slavic Woman's Farewell.” Cavalry units, the famous Tachanka machine gun carts, T-34 and KV tanks then rolled through the square.

The parade featured cadet battalions from the Moscow Military District’s Political Officers School, the Order of the Red Banner Artillery School, a regiment of the Second Moscow Rifle Division, a regiment of the 332nd Frunze Division, as well as rifle, cavalry and tank units from the Dzerzhinsky Division, the Moscow Naval Unit, the Special Battalion of the Military Council of the Moscow Military District and the Moscow Defense Zone, a battalion of former Red Guard members, two battalions of cadets involved in the Universal Military Training (Vseobuch) program, two artillery regiments from the Moscow Defense Zone, a combined anti-aircraft gun regiment and two tank battalions from the Stavka (General Headquarters) Reserve. In all, about 28,500 officers and men, 140 artillery systems, 160 tanks and 232 motor vehicles took part in the parade. No aircraft flew above the square because of bad weather, including heavy snowfall, blizzard conditions and limited visibility.

Although the parade lasted only 25 minutes, the guests watching the event became convinced that troop morale remained unbroken. Along with industrial and office workers, correspondents of foreign newspapers accredited in the Soviet capital stood on the grandstands to the left and right of the Mausoleum. The whole world listened to the radio broadcast from Red Square, conducted by famous Soviet radio commentator and journalist Vadim Sinyavsky.

On November 6-7, 1941, the Soviet high command planned and launched several powerful counterstrikes against the enemy in the Mozhaisk, Volokolamsk and Maloyaroslavets sectors. Red Army soldiers marched directly to the front after the parade.

This was the only parade during the entire Great Patriotic War of 1941-1945, with Soviet troops marching through Red Square once again only in May 1945.

The Federal Law, Days of Military Glory (Victorious Days) of Russia, signed on March 13, 1995, proclaimed November 7 a Day of Russian Military Glory and the anniversary of holding the military parade on Moscow’s Red Square in commemoration of the 24th anniversary of the Great October Socialist Revolution in 1941.

In 2003, the Moscow Government decided to hold an official march of members of children’s organizations, military school cadets and cadets of Suvorov military schools on Red Square. The Guard of Honor Company from the Moscow Military Commandant’s Office, the Cavalry Escort of the Presidential Regiment and the Combined Military Orchestra of the Russian Defense Ministry were invited to take part in the commemorative march. Since then, an official march in honor of the historic November 7, 1941 military parade on Red Square has become a tradition, with 2014 marking its 12th consecutive year.