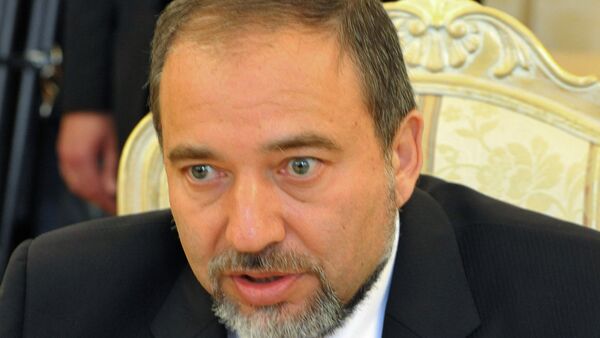 © Sputnik / Eduard Pesov
/
Go to the photo bank
Subscribe
The statement comes after reports that US President Barack Obama sent a secret letter to Iran's Supreme Leader stating that the countries have a common interest in fighting the IS.

"From our point of view, it's a mistake… Iran is unacceptable for any coalition of the moderate world against ISIS. They are not a partner for any dialogue in the Middle East," Avigdor Lieberman, Israeli Foreign Minister, said at a press conference, as quoted by Haaretz.

The statement comes after the Wall Street Journal revealed on Thursday that US President Barack Obama sent a secret letter to Iran's Supreme Leader Ayatollah Ali Khamenei in mid-October stating that the countries have a common interest in fighting the IS, but the cooperation will depend on Iran's ability to reach an agreement on its nuclear program with the six powers by November 24.

"To create such a linkage between the Iranian nuclear program and the fight against ISIS — we are against this approach," Lieberman emphasized.

Israel has accused Iran of attempting to develop a nuclear weapon under the guise of a civilian nuclear program, while Tehran argues that its nuclear development is aimed purely at meeting the country's growing energy needs and achieving other peaceful goals.

The United States, as well as five other international mediators including Russia, the United Kingdom, France, China, and Germany is currently negotiating a deal with the Tehran delegation guaranteeing the peaceful nature of the Iranian nuclear program. The initial July 2014 deadline for the final agreement was later postponed to November 2014.

A US-led coalition comprising more than 60 countries is currently carrying out airstrikes against Islamic State positions in Syria and Iraq. Iran is not participating in the efforts.