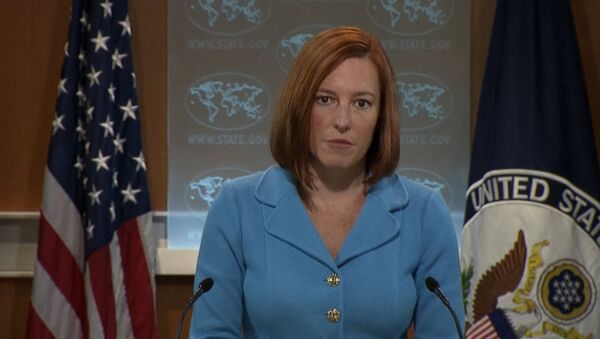 © Sputnik
Subscribe
US State Department stated that the United States notes with concern the Georgian Prime Minister’s dismissal of Defense Minister and his deputy ministers.

WASHINGTON, November 6 (RIA Novosti) – The United States is concerned about a series of resignations and dismissals the Georgian government has recently witnessed and calls on the country to stand united for the sake of stability and democracy, US State Department spokesperson Jen Psaki said.

“The United States notes with concern the Georgian Prime Minister’s dismissal of Defense Minister Alasania and his deputy ministers, and the subsequent resignations of State Minister for Euro-Atlantic Integration Petriashvili and Foreign Minister Panjikidze and her deputy ministers,” a statement posted on the State Department website Wednesday stated.

“We have greatly appreciated the work of these ministers in service to their country and in partnership with the United States,” it added.

The State Department also stressed that “at a time of regional turmoil and domestic economic challenge, it is in Georgia’s interest to demonstrate stability, unity, commitment to due process and the rule of law, and public confidence in democratic institutions.”

“We urge all parties to work towards these goals and to focus on securing Georgia’s Euro-Atlantic future,” Psaki said.

The statement comes after Georgian President Giorgi Margvelashvili at an emergency briefing on Wednesday urged the government to jointly consider the issue of implementing an association agreement with the European Union and a substantive package of measures that will help Georgia get closer to NATO.

On Tuesday, Georgian Prime Minister Irakly Garibashvili sacked the country's defense minister, Irakly Alasaniya following his statement that a "targeted attack" was being carried out against the defense sector, referring to criminal cases filed against Defense Ministry officials.