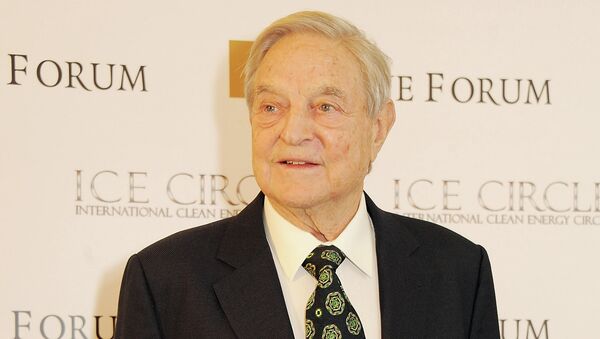 Daniel Zubov
All materialsWrite to the author
George Soros, the famed financier behind the network of Open Society Institutes, has a call to arms for the people of Europe: pick up your weapons, militarize your economies, and throw off the chains of peace - it is time for war with Russia.

MOSCOW November 5 (RIA Novosti) — The missive, delivered in the upcoming issue of the New York Review of Books, leaves no doubt about the extent of his warmongering; he declares, “It is high time for the members of the European Union to wake up and behave as countries indirectly at war.”

Soros is no stranger to Ukrainian politics. His International Renaissance Foundation in Ukraine has operated in the country since 1990, and spent $49 million in its first fifteen years of operation. Since then, an additional $51-$71 million has been spent by Soros in Ukraine — an unknown figure as total spending was removed from annual reports in 2012.

Soros’s funding also helped bring about the first Orange Revolution in 2004, where President Yushchenko declared Stepan Bandera a national hero, reenergizing the fascist and neo-Nazi forces who paved the way for the February 2014 coup.

The funding supported influencing elections, bringing the spirit of Maidan into the political sphere, and a “movement for European integration.” Soros himself gloated to CNN host Fareed Zakaria on May 14 that his foundation “has been functioning ever since [1990] and played an important part in events now.”

The Open Society Institute boasts offices in 27 Asian and European nations, including Poland, Latvia, Estonia, and all three nations of the Caucasus. These groups all follow a mission statement extolling their beliefs in “fundamental human rights, dignity, and the rule of law” and helping “communities press for change on their own behalf.”

Using those beliefs to promote a war rather than “justice and peace in the world” is a deep perversion of the fundamental values of humanity. The claim of support for local decision-making is laid bare by the demand that the nations of Europe go to war.

Will the 27 offices now support a civil society dedicated to bringing peace to the people in Ukraine and across Europe and Asia? Or will they follow the battle cry of their founder and start agitating their networks to pursue violent confrontation?

In addition to demanding that Ukraine transform from an industrial center to a war-ravaged battlefield, Soros also believes that the key to a successful Ukraine is a future of paying back European debt. He imagines a loan from the International Monetary Fund which would “transform Ukraine’s hard currency Eurobond debt into long-term, less risky bonds.

”Like Argentina and Greece, IMF loans and austerity will help extract all of the nation’s wealth and deliver it squarely into the pockets of the financiers, who history shows bring only economic ruin.

Accepting IMF demands rather than looking to Moscow or perhaps reconstruction funds through the BRICS bank is the defining characteristic of the post-Maidan coalition, which is easily explained by the tremendous financial and organizing support from Soros, his foundation, and his partners in the West.

To look across the landscape of Eastern Europe and demand that the solution to the current situation is more war is certainly a dangerous agenda. For someone with the voice, reach, and finances of George Soros to make such a statement, it shows a deep disgust for the post-war institutions of Europe and a lack of respect for the dignity of human life. The losers of every war are those forced to fight it, their families, and the residents of the battlefields where it is fought. To seek war is unhealthy; to demand that others fight is criminal.