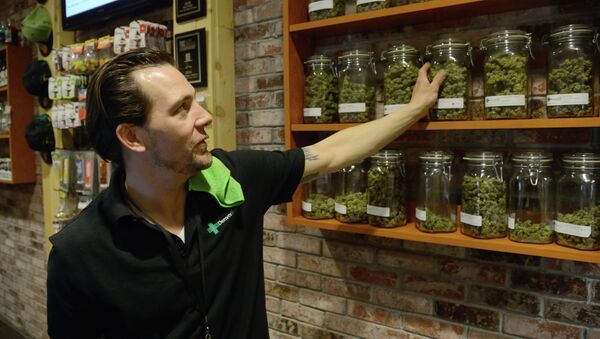 © Sputnik
Subscribe
International
India
Africa
The residents of Oregon and Alaska will be allowed to keep up to four and up to six marijuana plants at home respectively, and Oregonians will be able possess up to eight ounces of cannabis, compared to one ounce in Alaska.

MOSCOW, November 5 (RIA Novosti) — Alaska and Oregon became the latest US states to legalize recreational marijuana after voters in both regions approved the appropriate laws during November 4 referenda in their respective states, The Guardian reports.

CNN also notes that a similar initiative was passed in Washington D.C., but due to the District of Columbia’s unique status, Congress has the authority to overrule local laws, and some lawmakers have already indicated their intention to do so.

According to CNN, the new Oregon law, dubbed Measure 91, provides for personal possession, manufacture and sale of cannabis for people 21 years of age and older.
Alaska’s Law, Ballot Measure 2, is similar to the one passed in Oregon; it legalizes the sale, use and production of marijuana for people over 21 years old.

The residents of Oregon and Alaska will also be allowed to keep up to four and up to six marijuana plants at home respectively, and Oregonians will be able possess up to eight ounces of cannabis, compared to one ounce in Alaska, Washington State and Colorado, The Guardian adds.

The Washington Post reports that under the ordinance introduced by ballot Initiative 71, residents of and visitors to Washington D.C. who are at least 21 years old can legally possess up to two ounces of marijuana. Residents can additionally grow up to six cannabis plants at home, and up to one ounce of the substance can be transferred from one person to another, but not sold, CNN adds.

USA Today also reports that a measure to legalize medicinal marijuana in Florida, Amendment 2, has been narrowly rejected by voters, and that the use of medical cannabis has been legalized in Guam.

"Wins in Alaska and Oregon will provide a boost to efforts in other states because they will demonstrate the benefits of regulating and taxing marijuana. Losses won't really have much impact. After all, an initiative to make marijuana legal failed in Colorado in 2006," Mason Tvert, a spokesman for the pro-legalization Marijuana Policy Project, said, according to USA Today.

The drive to legalize marijuana became a popular nationwide movement following the legalization proponents’ success in similar ballot initiatives in Washington and Colorado in November, 2012, CNN observes. According to a Pew Research poll cited by the agency, 54 percent of Americans are for making marijuana legal.