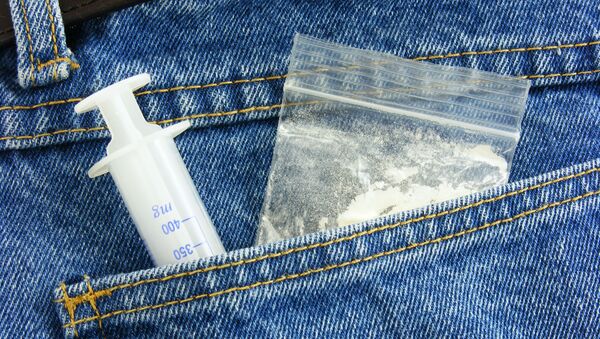 Alexander Mercouris
London-based lawyer
All materials
The US announced the “War on Drugs” in 1971 and since then has been waging this war with zero success, being at the same time the prime patron and ally of the world’s leading drug traffickers.

LONDON, November 5 (RIA Novosti) — President Putin’s recent Valdai Speech contained a striking phrase about the counter-productive nature of much of US foreign policy: “We sometimes get the impression that our colleagues and friends are constantly fighting the consequences of their own policies, throw all their effort into addressing the risks they themselves have created, and pay an ever-greater price.”

President Putin was referring to terrorism, but an equally valid example of the same point is the so-called “War on Drugs” that the US announced in 1971 and which it has been waging with no success ever since.

The usual claim made about the “War on Drugs” by its many western critics is that it is unwinnable because it is a form of Prohibition and as the US’s own experience with anti-alcohol prohibition in the 1920s supposedly shows, such a policy can never succeed because it flies in the face of human nature.

Whether or not that is true, it misses what is surely the most important reason why the US cannot ever win the War on Drugs, which is because at the same time that the US claims to be waging this war it is also the prime patron and ally of the world’s leading drug traffickers. A brief survey of recent history shows how this is the case.

The international drug trade took off in its modern form in the 1960s with the mass imports of heroin into the US from Turkey and from the so called Golden Triangle of south east Asia. The criminal cartel behind this heroin traffic was an organisation known as the French Connection, which operated from the French Mediterranean port of Marseille.

The French Connection was set up after the Second World War by a group of French Corsican gangsters who during the war had served in the Carlingue, the French auxiliary arm of the Nazi German Gestapo.

It is now generally acknowledged that these criminals used funds originally stolen by the Carlingue to set up the French Connection and did so with help from the CIA and the French secret service (the SDECE), which used them to fight the French Communist party, which during the Second World War had gained strong influence along the French Mediterranean coast, especially in Marseille.

Subsequently, during the French war in Indochina, the SDECE also turned to the French Connection to organise the heroin traffic, partly in order to fund its own operations against the Vietnamese Communists.  After the French left, this operation was taken over by the CIA, with opium poppies grown and processed in the area now known as the Golden Triangle by CIA-backed Chinese drug lords associated with the anti-Communist Kuomintang movement, which had ruled China before the 1949 Communist takeover.  The extent of collaboration between the US and the drug traffickers was so great that in the 1960s, the CIA was actually arranging flights to ship heroin from southeast Asia to the US.

The extent of CIA and SDECE collusion with the French Connection and with the Chinese drugs lords of southeast Asia was exposed in 1972 by the US historian Alfred W. McCoy in a seminal book The Politics of Heroin: CIA involvement in the Global Drug Trade (first edition 1973 and third edition 2003).

At the time of its initial publication, McCoy’s book was vigorously criticised by the CIA, which the publisher provided with the right to respond to the allegations.  These criticisms of the book were acknowledged to be weak and unconvincing and McCoy’s thesis is now accepted as true among mainstream scholars who are versed in the subject.

When the US began its withdrawal from Vietnam in the 1970s, and as it became clear that a Communist takeover of France was not going to happen, the French Connection lost its usefulness to its CIA and SDECE protectors and was wound up.  It then became the subject of a famous Hollywood film, released in 1971, which paints it out to be a far more glamorous and civilized organization than it actually was.  By this point, however, the trade in southeast Asian heroin had developed a life of its own, with heroin use achieving levels of penetration in the US that would once have been considered unthinkable.

The center of opium cultivation then switched to Afghanistan, where the same pattern reproduced itself.  The major cultivators and traffickers of opium and heroin were assorted criminals and gangsters who made up a large proportion of the so-called Mujahidin, the Islamic jihadi insurgency which the CIA was supporting in the 1980s because they were fighting the Soviets.  These criminals, of whom the most notorious is the Afghan warlord and drug trafficker Gulbuddin Hekmatyar, used the Soviet war in Afghanistan as a cover and protection for their criminal activities. Later many of these same people formed the core of the so-called Northern Alliance, which, together with the US, overthrew the Taliban in 2001 and formed the government that has ruled Afghanistan ever since.  The Taliban had tried to eradicate opium cultivation and heroin trafficking. Following their overthrow, both resumed with a vengeance.  Western writers frequently lament the endemic criminality and corruption in present-day Afghanistan. The fact that this is the obvious consequence of US support for drug traffickers and criminals who are now in power is never mentioned.

I can clearly remember the start of the heroin epidemic that hit Britain in the summer of 1981 as Afghan heroin churned out by the CIA’s Afghan Mujahidin friends poured in.  Before 1981, heroin abuse in Britain was an insignificant problem limited to a very small number of relatively affluent people.  It was during the heroin epidemic of 1981 that heroin became accessible to the wider population and became a mass problem. The source of the heroin that was flooding Britain was freely discussed at the time and it was widely and openly acknowledged that it was coming from Afghanistan.  However, even though the connection with the CIA-backed war was obvious, it was never mentioned. The entire British establishment including the government, the opposition, the police, the local authorities, the charities and the media combined to impose silence on the subject.  Since then, the level of heroin abuse has ebbed and flowed but remains embedded in British society to an extent that was unthinkable before 1981.

Much has been written about the damage the 1980s Afghan war did to Soviet society. The fact that it did far greater damage at the time to Western (especially European) society by embedding the drug culture there never gets talked about.

Where heroin led, cocaine has followed, with this too going from being a drug that was exclusively popular among wealthy Bohemians to being a drug of mass consumption.

Many people are vaguely aware that cocaine production and trafficking took off in Columbia in the 1970s and 1980s at a time when the right-wing pro-US Columbian government was fighting a counterinsurgency war against a left-wing guerrilla movement known as the FARC and that this war continues to this day. Some people also know that the government in this war is supported by right-wing paramilitaries. Very few, however, know that the Colombian drugs cartels and the right-wing paramilitaries are the same people.

The famous drugs smuggler Pablo Escobar, leader of the Medellin cartel, was for example heavily involved in right wing paramilitary activities in alliance with US corporations. The rival Cali drug cartel was set up by a group of wealthy upper class Colombians who used the right-wing paramilitaries they controlled as muscle for their drug trafficking activities.

What even fewer people know is that, repeating the pattern of what happened in southeast Asia in the 1960s and in Afghanistan in the 1980s, what caused the Latin American cocaine trade to explode was the CIA’s involvement in it.  In the 1980s the CIA formed an alliance with the Colombian drugs lords to support the Contras, the right-wing insurgency the CIA supported to overthrow the left wing Sandinista government in Nicaragua.  With CIA encouragement, the Contras themselves became heavily involved in the cocaine trade, as did the various right-wing paramilitary groups the CIA was simultaneously supporting in El Salvador during the civil war there.  The key transit corridor of these Colombian drugs was Mexico, where the individual who controlled the cocaine trade was Miguel Gallardo, a gangster who is now acknowledged to have been a CIA asset.  Gallardo is the acknowledged godfather of all the various vicious Mexican drug cartels that have proliferated in Mexico ever since, which have reduced parts of the country to a state of virtual war.

The extent of CIA involvement in the cocaine trade was exposed at the time by two American investigative reporters: Gary Webb and Robert Parry.  It was also confirmed in a detailed US Senate investigation carried out by US Senator John Kerry (now Secretary of State of the US).  The response of the US political and media establishment at the time was to ridicule the disclosures and obstruct Senator Kerry’s investigation.  Gary Webb was forced to resign from his newspaper in disgrace and eventually committed suicide.  Many years later, the CIA formally admitted to the truth of all the allegations and Webb, now vindicated, is about to be made the subject of a Hollywood film.

The CIA’s admission of its role in creating the modern cocaine trade is little known and barely acknowledged in the US.  A look at the present state of the heroin trade makes it grimly obvious that nothing has changed and that no lesson has been learned. Few people know that the major transit route for Afghan heroin to Europe is through the Balkans and specifically through Albania and Kosovo, Fewer people still know that this route is largely controlled by various gangsters and criminals, many of whom were involved in the Kosovo Liberation Army or KLA, which the US supported in the war against the Serbs in 1999.  Repeating what has happened in Afghanistan, following the war, some of these people under US protection are in power in Kosovo now.  Again paralleling Afghanistan, many western commentators lament the rampant corruption and criminality in Kosovo without ever mentioning the reason for it.

I do not wish to suggest that the only people who engage in drug trafficking are friends of the US. Columbia’s originally Marxist FARC guerillas are now apparently also involved in the international cocaine trade and the CIA and the US do not seem to be involved in the enormous trade in synthetic drugs that has developed since the 1980s.  The fact however remains that an astonishingly high proportion of the world’s biggest and most dangerous drugs traffickers have at crucial points in their careers enjoyed the favor and protection of the US, which is what makes the effort to wage the War on Drugs in the end so futile and even ridiculous.

In the meantime, the latest reports say that the opium harvest in Afghanistan has broken all records. Given recent history, it is easy to see why this happened and why the US seems so insouciant about it.