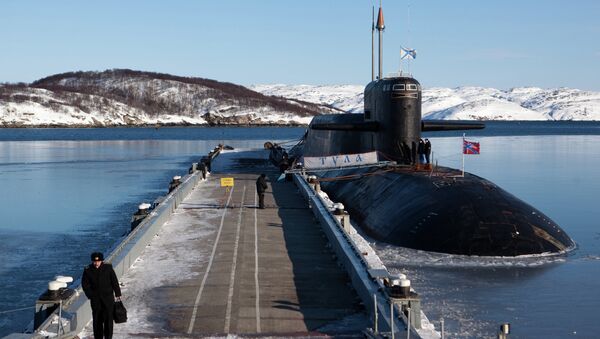 A Russian Northern Fleet nuclear sub fired a test intercontinental missile from the Barents Sea, according to the Russian Defense Ministry.

"Within the frameworks of testing the reliability of marine strategic nuclear forces, the Tula [nuclear submarine] launched a Sineva intercontinental ballistic missile from the Barents Sea to the Kura Range [in Kamchatka]," the statement says.

The D-9RM launch system equipped with RSM-54 missiles was put into service in 1986. The production of the RSM-54 was halted in 1996 but after three years, the Russian government resumed the production of a modernized version of the missile.

Flight tests of Sineva were completed in 2004, and in 2007 the Russian Navy put the missile into service.

On October 29, Russia successfully test-fired the Bulava solid propellant ballistic missile from the Borey-class Yury Dolgoruky nuclear-powered submarine. The missile was launched from the Barents Sea and hit a target located on the Kura Range.