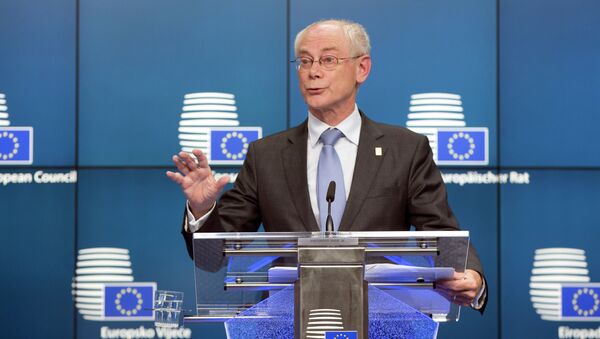 BRUSSELS, November 4 (RIA Novosti) — Elections in the Donetsk and Luhansk People's Republics (the DPR and LPR) held on Sunday are a negative step in the implementation of the Minsk agreement, the European Council President Herman Van Rompuy said Tuesday.

"We have called upon the Russian Federation to assume its responsibilities for the full implementation of the Minsk agreement. The energy deal for the winter is a positive step, the illegal so-called elections in the Donbas area a very negative one," Van Rompuy said during a European Council meeting.

On November 2, the DPR and the LPR held elections for the heads of local government and representatives of the legislative bodies, which Kiev and the West have called illegitimate.

Following months of bloodshed, a ceasefire agreement was reached by the Ukrainian government and independence supporters on September 5 in Minsk.

As part of the Minsk agreements, a law on the special status of parts of the Donetsk and Luhansk regions was adopted by Kiev, stipulating that local elections would take place on December 7.

The leaders of the DPR and the LPR nevertheless held elections earlier, laying claim to all of the territory within their respective administrative entities in Ukraine.