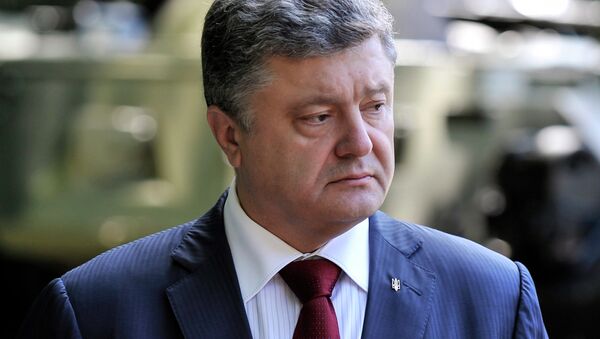 © Sputnik / Mikola Lazarenko
/
Go to the photo bank
Subscribe
Ukrainian President Petro Poroshenko stated that he plans to submit an issue of special status of Donbas law abolition to the Ukraine's National Security and Defense Council.

"One of the issues I will submit to the Ukraine's National Security and Defense Council is abolition of law on special status of Donbas," Poroshenko said in a statement published on his official website.

The council's session is scheduled for Tuesday, November 4.

The crisis in Ukraine's eastern regions escalated when Kiev government launched a military operation against independence supporters in eastern Ukraine in mid-April.

This political discontent saw the Donetsk and Luhansk regions in eastern Ukraine declare themselves people's republics which later formed the union of Novorossiya.

On September 16, Ukrainian Parliament, the Verkhovna Rada, approved a law on self-administration in parts of the Donetsk and Luhansk regions, also known as Donbas. The same day it was signed by the Ukrainian president.

The law, which came into effect earlier on Saturday, granted Donbas a special status, guaranteed the right to use Russian or any other language and scheduled local elections for December 7. However, the regional governments defied Kiev's plans for them and slated their polls for November 2.

Meanwhile, the United States, the European Union and the United Nations have condemned the elections, claiming they undermined the peace agreement reached in Minsk, Belarus. However, Russia said earlier it was going to recognize the results of the polls since they would help legitimize the leadership in the region.