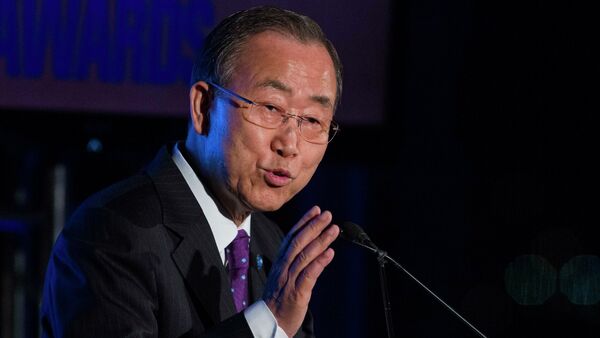 © REUTERS / Lucas Jackson
Subscribe
A spokesperson for the UN Secretary-General said that Ban Ki-moon urged Kiev authorities and independence supporters of eastern Ukraine to recommit themselves to the implementation of the Minsk agreements.

UNITED NATIONS, November 3 (RIA Novosti) — The United Nation's Secretary-General Ban Ki-moon calls on the Kiev authorities and the independence supporters of eastern Ukraine to urgently recommit themselves to the implementation of the Minsk agreements, a spokesperson for the UN Secretary-General said Monday.

"He [Ban Ki-Moon] urges all parties to recommit on an urgent basis the full implementation of the letter and the spirit of the Minsk Protocol and memorandum, which are designed to bring peace and stability to Ukraine," Stephane Dujarric said at a briefing in New York, adding that the Secretary-General remains deeply concerned with the way the situation in eastern Ukraine unfolds.

On Monday Ukrainian President Petro Poroshenko noted that Kiev complies with the spirit and letter of Minsk protocol but plans to introduce changes to its action plan amid the elections of November 2 in Donbas, which Kiev sees as the violations of the Minsk protocol. The possible changes to Kiev's strategy are to be discussed at the session of the Ukraine's National Security and Defense Council scheduled for Tuesday.

On Sunday, the Donetsk and Luhansk people's republics held elections for the heads of local government and representatives of the legislative bodies. The electoral process went ahead with no violations recorded that could affect the results.

Kiev and several western countries said they would not recognize the results of this vote and have repeatedly called it illegitimate. Russia, however, has emphasized that not recognizing the results of the elections in Donbas would run counter to the Minsk protocol and undermine efforts to establish peace in the country.