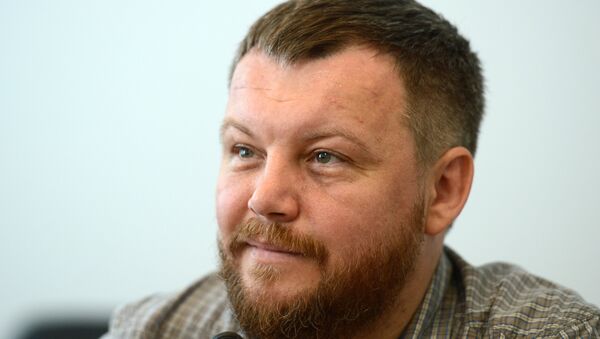 DONETSK, November 3 (RIA Novosti) — The deputy prime minister of the self-proclaimed Donetsk People’s Republic (DPR) on Monday rejected the Ukrainian president’s call to make void the results of Sunday’s elections in the republic, saying they were in line with the Minsk agreements on peace settlement.

“The elections were a success, there was a high turnout – our voters were queuing for hours in cold weather to take part in them. International observers say that polls were fair and were held at a high level. So there is no need to nullify the results. It was an important step toward creating a sovereign state,” DPR’s Andrei Purgin told journalists.

This came after Donetsk and Luhansk republics in eastern Ukraine – DPR and LPR respectively – voted in presidential and parliamentary polls, a move that upset the government in Kiev and its Western allies. DPR’s acting leader Alexander Zakharchenko was elected to head DPR.

Ukrainian President Petro Poroshenko said earlier that Kiev would adopt a new law on decentralization in Donbas, which comprises part of southeastern Ukraine, if independence supporters there reconsidered the results of November 2 elections. The Ukrainian president said later he was also considering scrapping special status of the southeastern regions.

Poroshenko added Kiev would be “ready to adopt a new law — when all the sides go back to fulfilling the Minsk protocol.”

Purgin stressed that the vote "does not run counter to the Minsk agreement that Kiev mentioned.” He stressed the elections “were held in the time brackets stipulated by the Minsk agreements.” “It is said nowhere in the agreements that they [elections] must be held according to the rules that are dictated by Kiev,” the deputy prime minister noted.

“We continue to stick to these agreements despite the fact that the Kiev side has breach almost every clause,” Purgin argued.

“We are ready to economic and cultural contacts with Kiev, ready to hold continue negotiations, but a political alliance is out of the question. Kiev has too much innocent blood on its hands,” he said.

“Now DPR and LPR will be represented at the talks with Kiev by their legitimate representatives who enjoy the confidence of the voters,” Purgin said.

EU and US authorities announced earlier that elections in Donbas violated the Minsk agreements on the settlement of the Ukrainian crisis, while Russia said it would recognize the polls and emphasized that condemning them would undermine efforts to reach a peace settlement in Ukraine.