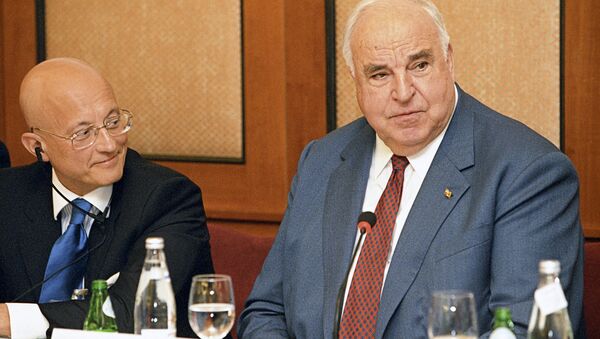 Publishing excerpts from Kohl’s new book, “Out of Concern for Europe”, FAS cited Kohl as saying that the decision to eject Russia from the Group of Eight was a “drastic and depressing” one. Kohl had played a key personal role in working to add Russia to the body in 1998, in the interest of improving relations and encouraging reforms in the country.

Another excerpt from the book notes that “the West, just as much as Russia and Ukraine, must take care not to squander everything that we achieved in the past.”

Kohl, Germany’s longest-serving chancellor, presided over the unification of the country and worked to improve German-Russian relations during a difficult period of transition for both countries. He will present his new book today in Frankfurt alongside Jean-Claude Junker, the President of the European Commission.

Other excerpts from the book leveled criticism at European leaders for allowing Greece into the Eurozone despite its high debt, as well as the bending of fiscal rules for the debt-ridden country’s stabilization pact.

Last month, Kohl became entangled in a scandal over an autobiography he’d planned to have ghostwritten by Heribert Schwan, based on an extensive series of interviews; he later had a falling out with Schwan, who has plans to release the material. The chancellor had made some candid remarks, released by Der Spiegel last month, which included calling Soviet leader Mikhail Gorbachev a “failure” who left behind a forgettable legacy. According to Kohl, while Gorbachev “called time on Communism, partially against his will,” it was difficult for him “to think of much else in terms of a real legacy.” Kohl also aimed his criticism at Chancellor Angela Merkel, who “could not even hold her fork and knife properly” at state dinners, in his words.