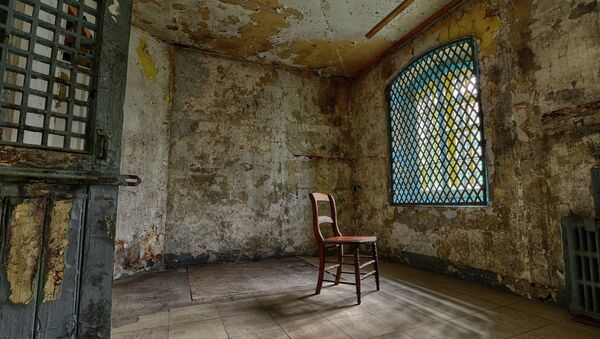 After five years and $18.5 million of US taxpayers money spent on renovating Pol-i-Charkhi prison in Afghanistan, the project remains incomplete.

MOSCOW, November 3 (RIA Novosti), Ekaterina Blinova —A corruption scandal which has cost US taxpayers millions has been exposed by the Special Inspector General for Afghanistan Reconstruction (SIGAR): after five years and $18.5 million spent on renovating Pol-i-Charkhi prison, the project remains incomplete. This is just the latest in a series of costly blunders that have characterized US humanitarian efforts in the country.

"The Department of State’s (State) Bureau of International Narcotics and Law Enforcement Affairs (INL) paid Al-Watan Construction Company (AWCC) $18.5 million for work performed on a contract valued at $20.2 million, even though AWCC only completed about 50 percent of the required work," the SIGAR's report stated.

The US watchdog on Afghanistan’s reconstruction has accused the contractor of "defective workmanship," and indicated several serious flaws, particularly, "failure to backfill trenches, improper roof flashing, soil settlement issues, and the failure to connect six back-up generators to the prison's power grid."

Not all of the contractor's work complied with the requirements of the contract, the SIGAR reveals. For instance, AWCC used wooden roof trusses instead of metal ones and simply "covered 30-year old wood trusses with new roofing material," breaching a contract which stipulated that the  firm had to completely renovate the roof. The watchdog discovered that AWCC had bribed a corrupt State Department employee to let it use cheap, shoddy materials.

It is worth mentioning that although the notorious jail was designed to accommodate 5,000 of prisoners it is apparently overcrowded, housing about 7,000. Photographs released by the watchdog revealed the gruesome conditions detainees live in: the prison's inmates sleep on the floor in its hallways, the walls and the columns of the building are in disrepair, and shoddy wiring threatens the safety of prisoners and staff.
However, the US State Department has announced that it intends to accomplish the renovation project. Predictably, new work will require additional funding and US taxpayers are slated to foot the bill: "INL estimated it would cost $11 million to finish renovations and another $5 million to construct a wastewater treatment plant to remedy wastewater pooling on the surface of the two septic/leach fields." However, the plan does not include the planned connection of  six back-up diesel generators to the prison's power grid.

It should be noted that Pol-i-Charkhi prison case is not the only example the SIGAR has disclosed of corruption and US tax dollars being wasted. Earlier this year, John Sopko, the inspector general, identified "potentially billions of dollars wasted in Afghanistan," pointing out deserted and aborted construction projects as well as "phantom" projects and buildings which don’t comply with international building codes, in addition to "improperly awarded contracts," as well as a total lack of transparency.

"The Afghanistan reconstruction budget is separate from the estimated $105 billion annually the US spent at the peak of the 13-year war. Since 2002, Congress has appropriated approximately $103 billion to help rebuild Afghanistan, and the SIGAR's office has said that since March of this year, $17.9 billion of that remains to be doled out," Fox News reported in July 2014. For comparison’s sake, this is higher than the total 2013 annual expenditures of Poland ($92.47 billion), Ireland ($91.3 billion), and Taiwan ($90.38 billion), according to America’s Central Intelligence Agency.

In an interview with Fox, Sopko stressed that "neither Afghanistan's nor America's interests" were well served in Afghanistan:  "Too often we've pushed taxpayer money out the door without considering if the Afghans need it and can sustain it."

The millions wasted on Pol-i-Charkhi prison renovation project makes it the latest casualty in America’s failed efforts to “win the peace”, which have only resulted in a string of frauds that violate the interests of American taxpayers.