Foreign Observers Surprised With Kiev’s Intention to Blacklist Them 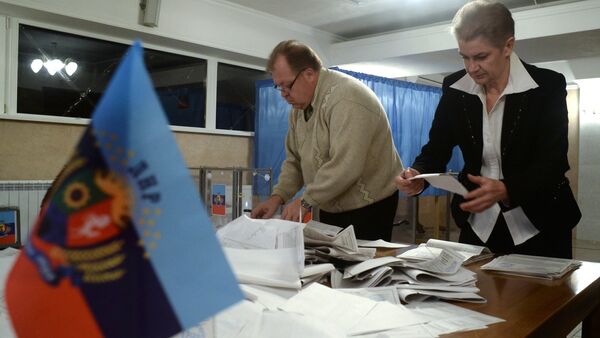 © Sputnik / Valery Melnikov
/
Go to the photo bank
Subscribe
The foreign observers, monitoring the elections in the self-proclaimed Luhansk and Donetsk People's Republics in eastern Ukraine expressed concern over Kiev's intention to blacklist them and call it the violates the principles of federalism.

Earlier on Sunday, the Security Service of Ukraine (SBU) announced Kiev's plans to declare international monitors at the elections in Donbas persona non grata on the territory of Ukraine.

"I feel sorry that I was blacklisted [by Kiev authorities], as I was previously observing the elections in Ukraine several times. I only monitor the election process. If I saw some violations, I would report. My duty is to protect the rights of the people," Italian lawmaker Lucio Malan said Sunday.

The Member of European Parliament, Jean-Luc Shefhauzen, said that declaring the observers persona non grata by Kiev is contrary to the idea of peace and does not meet the concept of federalism, because federalism is an ability of citizens to determine their own future.

On Sunday, the self-proclaimed Donetsk and Luhansk people's republics were electing their regional leaders and legislative bodies.

One hundred observers from a number of European countries and the United States have arrived in the region to monitor the elections.

The authorities in the European Union and the United States, however, said earlier the elections would come against the Minsk agreement on the regulation of the crisis in Donbas, and that the international community would not recognize them.

Meanwhile, Russia has expressed its intention to recognize the elections in the self-proclaimed people's republics, saying not doing so would run counter to the Minsk protocol and disrupt the progress toward finding a sustainable political solution to the conflict.