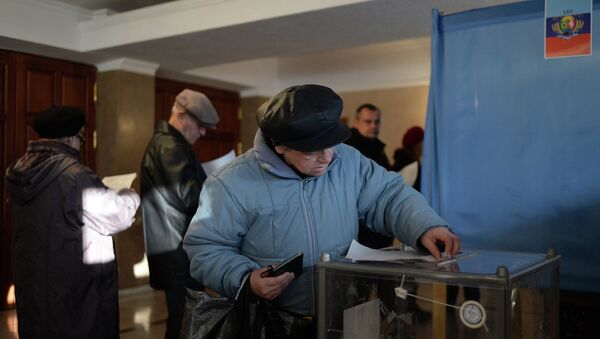 © RIA Novosti . Valery Melnikov
Subscribe
The Central Election Commission from the self-proclaimed Luhansk People’s Republic said Sunday’s voter turnout for the elections in the republic stood at 68.71 percent and more than 705,000 voters cast their ballots in the republic.

According to the Central Election Commission, more than 705,000 voters cast their ballots in the republic as well as those located in Russia.

Luhansk extended the voting process in polling stations for an additional hour due to long lines.

The political discontent led Luhansk and Donetsk regions in eastern Ukraine to hold referendums this May on self-determination. Over 90 percent of the voters cast their votes for greater autonomy. The territories declared themselves sovereign states as a result.

The European Union and the United States said earlier the elections would violate the Minsk agreement on the regulation of the crisis in Donbas, and that the international community would not recognize them.

Meanwhile, Russia expressed its intention to recognize the elections in the self-proclaimed people's republics, saying that the not recognizing of the elections would instead run counter to the Minsk protocol and disrupt the progress towards finding a sustainable political solution to the conflict.