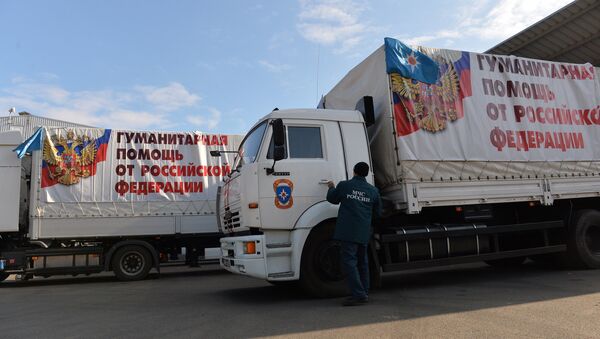 © Sputnik / Alexei Kudenko
Subscribe
Another Russian humanitarian aid cargo reached the cities of Luhansk and Donetsk in the war-hit Eastern Ukraine. More than 50 trucks have delivered 500 tons of humanitarian aid to each city.

LUHANSK, DONETSK, November 2 (RIA Novosti) — A new Russian convoy has brought humanitarian aid cargo to the cities of Luhansk and Donetsk in the war-hit eastern Ukraine, a deputy chief of the crisis management center with the Russian Emergency Situations Ministry said Sunday.

“More than 50 trucks have reached Luhansk without running into any sort of trouble. They delivered over 500 tons of humanitarian help,” Oleg Voronov said.

The cargo will be stored in several warehouses designated for fuel, building materials and foodstuff.

Another 50 trucks have arrived in Donetsk. The city has been struck by a humanitarian crisis following months of clashes between pro-government troops and militias.

Earlier in the day, a 100-truck Russian aid convoy cleared customs checks at the Donetsk-Izvarino border crossing, according to Voronov. It split into two groups that headed to Luhansk and Donetsk, two stricken Ukrainian cities in the east.

The convoy has brought around 1,000 ton of aid, including food, building materials, fuel and medications.

Russia has previously sent four humanitarian convoys to eastern Ukraine, which has suffered greatly from the Kiev-led military operation against the region's independence supporters.

The last convoy was delivered on October 31. It consisted of 100 trucks carrying 1,000 ton of humanitarian aid that comprised food and building materials.