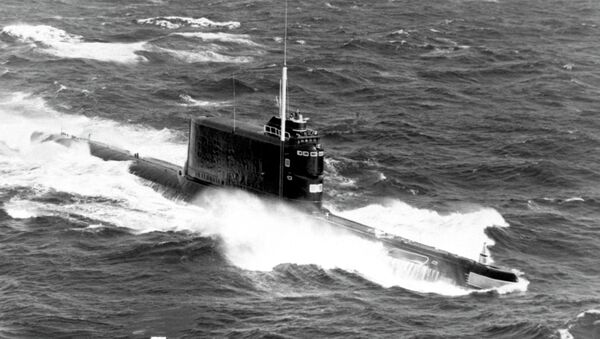 Sources in the government of South Korea have said that the North “imported a Soviet-era Golf-class diesel submarine and modified it”, according to a Yonhap News report. Subs of this series are also known as ‘Project 629’. They are powered with a hybrid diesel-electric engine and are able to carry ballistic missiles and/or Scud missiless. Golf-class subs had been in Soviet service in 1958-1990 and were decommissioned thereafter.

Described as “ancient marine technology” in a report by the International Strategy and Assessment Center, these subs may pose serious danger to the South, Japan and the US forces in the region. It is alleged that several of Golf-class subs were purchased from Russia in 1993 by foreign entities.

"The new submarine is 67 meters long with a beam of 6.6 meters, and has a dived displacement in the 3,000-tonne range," Yonhap’s source in Seoul said. The vessel is able to carry single-stage, liquid-propellant missiles with a 1,180-kilogram warhead and a maximum range of 1,420 kilometers. The shortest distance between North Korea’s Sinpo, where the sub was spotted, and Japan is 650 km.

It is alleged that the North has modified the imported vessel. Although Seoul claims Pyongyang does not have submarine-launched ballistic missile (SLBMs) technology, certain developments in this area of technology have been reported recently. In September, South Korea’s Joint Chiefs of Staff said that “there is no intelligence yet that North Korea has an SLBM in operation. But the possibility of a North Korean submarine equipped with an SLBM has been detected recently,” as quoted by the International Business Times.

The North’s new sub was spotted from a satellite and first reported by a US-based monitoring entity. "The North's new vessel is what the website 38 North reported last month as 'an unidentified submarine' moored in a boat basin at the Sinpo South Shipyard, citing its review of satellite imagery," Yonhap’s source said. "According to the analysis of satellite imagery revealed by 38 North, a ground test facility for the SLBM launch has been up and running at the Sinpo shipyard," he added.

"It would take one or two years before the North completes the test for the vertical launch of missiles from the sea," South Korea’s military say.

Pyongyang has 70 to 90 submarines, all of which are scraped Soviet-era vessels. Most of them are limited in ability and cannot be equipped with ballistic missiles. Now, the new sub is able to carry at least three missiles with warheads. This development will further exacerbate tensions in the Korean peninsula, possibly undermining recent S.Korean and China's efforts to resume nuclear talks with the North.