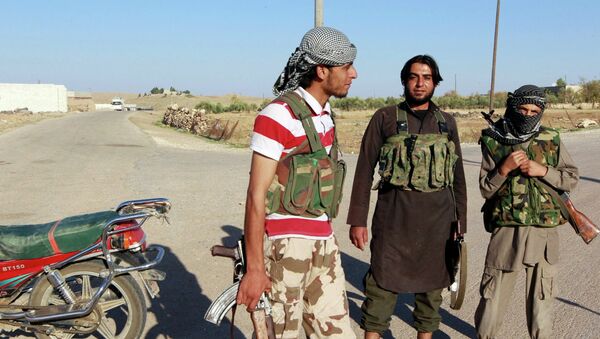 © Sputnik / Stringer
Subscribe
According to Hawar Shawki from the Kurdish National Congress of North America, the deployment of Peshmerga fighters from Iraqi Kurdistan to the Syrian border town of Kobani will reinforce the besieged Kurds, but still more forces are needed to put an end to a war with the Islamic State militants.

"We hope with the Peshmerga forces along with their fellow Kurdish forces will help to bring an end to the fighting with Islamic State in Kobani," Shawki told RIA Novosti.

"We still want the international community to ramp up its military support for the Kurdish fighters and bring stability to the region," he added.

On Friday night Peshmerga fighters from Iraqi Kurdistan started entering the Syrian border town of Kobani to help the local Kurdish population fight against well-armed Islamic State fighters, according to the Syrian Observatory for Human Rights.

For the past seven weeks Kobani, also known as Ayn al-Arab, one of the largest towns in the Kurdish region of Syria bordering Turkey, has been under attack of the Islamic State militants.

Kurds are one of the ethnic groups in Iraq and Syria that have suffered greatly from Islamic State violence.

In September US President Barack Obama announced his decision to form an international anti-IS coalition. Washington extended its airstrikes against the militants into Syria, while continuing airstrikes against the group's targets in Iraq. Obama said the United States would arm and equip Kurds, Iraqis and Syria's moderate opposition in an effort to eradicate the IS.