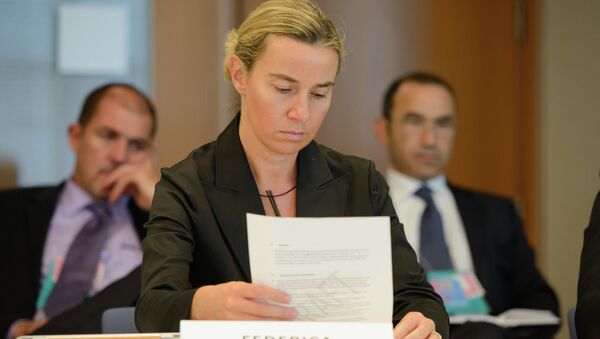 "I think she is a true European, so in terms of methodology, I think she will try to find a common position," Silvia Francescon, the head of European Council on Foreign Relations' Rome office told RIA Novosti. "It would be already a huge change if Federica Mogherini could manage to get leaders to share a common position instead of individual positions. So I hope there will be a great change in this respect," Francescon stressed.

"We cannot say that Europe has been united on several fronts," Francescon noted, citing Italy's opposition to the removal of Assad in Syria, while other European leaders preferred an unsure alternative to his rule.

"She may also make a difference if she succeeds to effectively pool the foreign policy instrument of the EU, combining diplomatic tools with trade, economic assistance, energy, neighborhood and enlargement policies and humanitarian assistance," senior policy fellow with the European Council on Foreign Relations" Berlin office Josef Janning said. "This pooling approach did not work well under her predecessor, Baroness Ashton. Now, with clusters being a building principle of the new European Commission, there will be a new window of opportunity for a more effective policy," Janning added.

Janning stressed, however, that major changes in EU foreign policy were quite unlikely, but Mogherini would launch a review of policies in 2015 which could result in "the development of a new EU Security Strategy in cooperation with foreign ministers from member states."

"The old strategy needs an overhaul in light of the changing international environment," Josef Janning said adding that "Russia would certainly be an issue in this document alongside others."

In terms of the EU stance on relations with Russia, the experts stress that changes are unlikely in the short term, as it is mostly defined by the European Commission, and Mogherini's "pro-Russian approach", as it is often called is unlikely to prevail, at least for now.

"I think she wanted to demonstrate to those who were skeptical about her that they can rely on her anyway," Silvia Francescon said reminding that eleven EU member states from Eastern countries did not want to support her candidacy because of her pro-Russian position. "As soon as she got the position, she immediately said that Russia is extremely important, but still we do have big issues."

"In the short term, I do not see any changes happening," Josef Janning told RIA Novosti.

"The current policy is defined by the European Council and will be continued as long as a negotiated solution of the conflicts in and over Ukraine is not found or implemented," Janning noted.

But in the mid-term, Janning said the European Union would look for ways to engage with Moscow.

"For many EU governments, Russia is an important neighbor with which they need a working relationship even under the premise of major policy differences. In addition to that EU foreign policy will seek to continue working with Russia on issues of nuclear policy, especially Iran, and conflict management in the region, especially in the Middle East," Janning said.

Federica Mogherini is assuming the position at a time when Iran and the so-called P5+1 (China, France, Germany, Russia, the United Kingdom, and the United States) are due to finalize the details of a permanent nuclear deal. The deadline for the deal is November 24, and her predecessor Catherine Ashton has been actively involved in the talks.

"I think Catherine Ashton will keep on leading the negotiations including the nuclear deal at least until the 24th of November. Something I do not understand why – I see some merits, but I also think that Mogherini should be involved in this too," Silvia Francescon told RIA Novosti.

Experts agree that by taking over as the EU foreign policy chief, Federica Mogherini is seen as a good fit for the job, particularly thanks to her wide experience and knowledge.

"Definitely, she is a very well prepared person – she knows the dossier, she studies a lot," Silvia Francescon told RIA Novosti. "Her predecessor was not a true European her predecessor did not know the foreign policy dossier. Maybe Catherine Aston learnt them on the job, but definitely she didn't know (the dossier) before. This is something we cannot say about Federica Mogherini," Francescon stressed.

"Federica Mogherini knows what we are talking about," Francescon said adding that Mogherini is also a good negotiator – tough and strong.

Josef Janning noted that Mogherini made a very positive impression in her first encounters with the EU institutions, the Parliament, Commission services and the European External Action Service.

"Many report her as being serious, well prepared, quick and attentive," Janning told RIA Novosti. "She certainly brings strong personal assets to the job. The open question is whether she will develop enough authority to lead other Commissioners on foreign policy and to cooperate effectively with foreign ministers from member states. This, only time can tell. To succeed on both counts will be key to her performance."