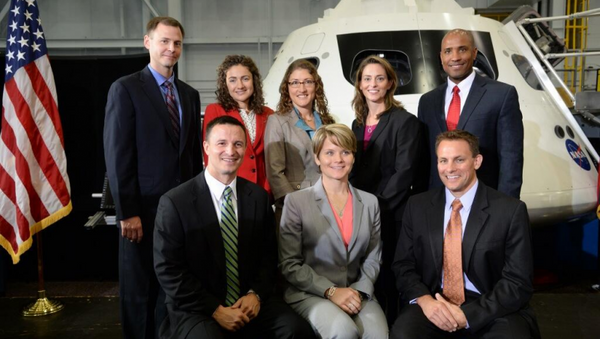 NASA has completed the ‘Orion’ far-space exploration spaceship, with its first orbital test set for 4 December.

MOSCOW, November 1 (RIA Novosti) — The US National Aeronautics and Space Administration (NASA) has announced it has completed the ‘Orion’ spaceship and it is now ready for its first test flight set for 4 December.

The ‘Orion’ Multi-Purpose Crew Vehicle (MPCV), developed and built by Lockheed Martin Space Systems Co.,  shares a similar design to that of the Apollo Program’s space capsule. It consists of the crew module, the service module, the launch abort system and an adapter. The new spacecraft is more spacious than the Apollo module as it is able to carry 4 crew members as compared to the latter’s capacity of 3 humans aboard.

The new spaceship is designed to take human astronauts to asteroids and to Mars.

During the first test flight, the unmanned Orion will be launched by a Delta IV heavy rocket to 15 times the height of the International Space station. The complex two-orbit test flight will last 4.5 hours, as Orion will go around Earth twice at a different height each time. The higher testing orbit is 3,600 miles (5,793.6 km) away from the Earth, further  away than any manned spaceship has been in more than 40 years. Orion will return to Earth at a speed of roughly 20,000 mph (32186 kmph), and it will withstand temperatures on 4,000F (2200C) in the Earth’s atmosphere.

“This is just the first of what will be a long line of exploration missions beyond low earth orbit, and in a few years we will be sending our astronauts to destinations humans have never experienced,” Bill Hill of NASA’s Exploration Systems Development said as quoted by the NASA blog. “It’s thrilling to be a part of the journey now, at the beginning.”

The spaceship will be moved to the launch site on 10 November, but until then it will be storage at the ‘Orion Facilities’ at Kennedy Space Center in Florida.

Orion is to make its first flight with human crew aboard in 2021. Initially the Orion project was launched in late-2000s in order to develop a replacement spacecraft for the obsolete space shuttle program.  Orion is part of the Constellation Program, whose ultimate goal is to renew human exploration of the Moon. The project had been put on hold by the Barack Obama administration in an attempt to control expenses of the federal budget, but the project was restarted in 2011 to produce a far-space exploration module that we have today.

Earlier this week, NASA said that it is entertaining “proposals for concept studies or technology development projects that will be necessary to enable human pioneers to go to deep space destinations such as an asteroid and Mars,” an obvious invitation for private sector enterprises and scientific institutions to join up in the Agency’s efforts to explore the Solar System.

“The agency seeks to use public-private partnerships to share funding to develop advanced propulsion, habitation and small satellite capabilities that will enable the pioneering of space. Public-private partnerships of this type help NASA stimulate the U.S. space industry while working to expand the frontiers of knowledge, capabilities and opportunities in space,” NASA said.

According to President Obama, NASA's primary goal is to land an astronaut of a near-Earth asteroid by 2025 and deliver a human expedition to Mars around 2030.