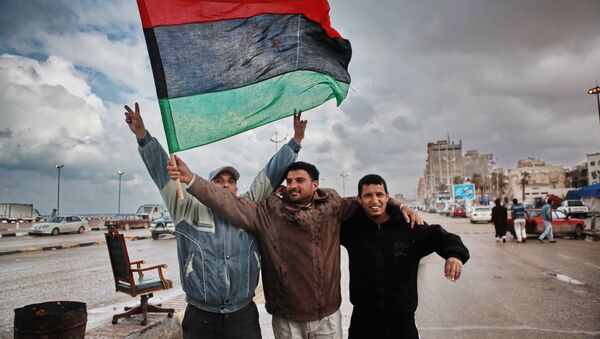 © Sputnik / Andrei Stenin
/
Go to the photo bank
Subscribe
International community, including the United States, condemned violence in Libya and any foreign involvement in the crisis. Since the overthrow of Muammar Gaddafi in 2011, the country has been gripped by violence.

MOSCOW, November 1 (RIA Novosti) — The United States, the European Union, the African Union and the Arab League have condemned the violence in Libya and any foreign involvement in the crisis, a joint communique posted by the US Department of State said.

This comes after a meeting in Paris, France between the UN special envoy for Libya, Bernardino Léon, and his counterparts from the African Union, the Arab League, the European Union, France, Germany, Italy, Malta, Spain, Britain, and the United States.

"They stated that the efforts of all international partners should aim to support the UN mediation efforts. They rejected any external interference in Libya," the communique said, adding the envoys were concerned about "the growing terrorist threat affecting the current political situation which can only be defeated by a strong and united Libya."

Special envoys said a dialogue was needed to reconcile the warring parties and allow for the normal functioning of the Council of Representatives. They also stressed that "the formation of a fully inclusive and representative government, and the withdrawal of militia groups from cities and airports throughout Libya" was essential in bringing back peace to the country.

The group of representatives emphasized that there was no military solution to the current crisis in Libya and commended Léon's determination to "organize in the near future a new round of discussions".

Libya has been gripped by violence since the 2011 overthrow of its long-time leader, Col. Muammar Gaddafi. The country has seen fierce clashes between numerous militias, armed with weapons seized from government ammunition depots.

A rift in Libya's new government has led to a so-called diarchy, in which powers are shared by the elected parliament and Prime Minister Abdullah al-Thani on one side, and by the pro-Islamic General National Congress and its self-proclaimed Prime Minister Omar al-Hasi on another. However, some parts of the country are not controlled by any of the central powers.