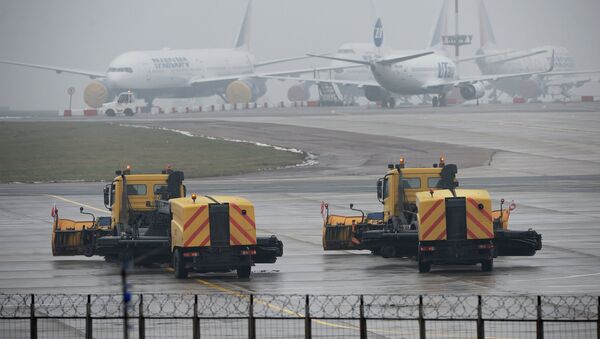 According to the Russian Investigative Committee, the driver of the snowplow that the Total CEO plane hit upon takeoff from Vnukovo airport has been questioned and is now in custody.

MOSCOW, October 31 (RIA Novosti) – The driver of the snowplow that the private jet of Total CEO Christophe de Margerie hit upon takeoff from Moscow's Vnukovo airport, has been charged in the plane crash case, the Russian Investigative Committee said Friday.

"Today, snowplow driver Vladimir Martynenko was charged," the Investigative Committee said on its website, adding that Martynenko has been questioned and is now in custody.

A flight supervisor, a senior airport engineer responsible for the removal of snow from the runways, as well as an air traffic controller and an air traffic trainee have also been charged over the crash.

A Falcon 50 business jet, carrying Total CEO Christophe de Margerie, crashed on October 20 at Vnukovo-3 Airport in Moscow. The incident happened when the aircraft, which was due to fly to Paris, hit a snow removal vehicle during the take-off. De Margerie, who was the only passenger on board, and the three crew members, also French citizens, died as a result of the crash.