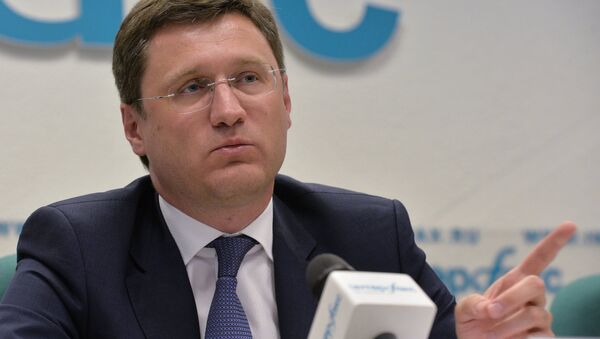 Russian Energy Minister Alexander Novak expressed his hope that Gazprom and Naftogaz will return to a constant dialogue and will elaborate new concrete steps to secure deliveries after the so-called “winter package” expires.

BRUSSELS, October 31 (RIA Novosti) — Russian Energy Minister Alexander Novak, following trilateral gas talks between Russia, Ukraine and the European Union said that he hopes Gazprom and Naftogaz will be able to agree on a continuation of Russian gas deliveries to Ukraine after the so-called “winter package” expires.

“Of course our companies, Gazprom and Naftogaz, will return to a dialogue. I think that today’s agreement will allow them to continue the dialogue on a constant basis, and new concrete steps will be prepared to secure deliveries from April,” Novak told journalists after the trilateral talks.

On Thursday, Ukraine, Russia and the EU have signed a “winter package” agreement, which embodies resumption of Russian gas deliveries to Ukraine and uninterrupted transit of gas to the EU during the winter months.

In particular, Ukraine agreed to pay $1.451 billion in Russian gas debt immediately, prepay for at least 4 billion cubic meters of gas, and to pay a total of $3.1 billion to cover part of its debt to Russian energy giant Gazprom by the end of the year. At the same time, Russia agreed to give Ukraine a $100 per 1,000 cubic meters discount until March 2015 in a form of export duty reduction.