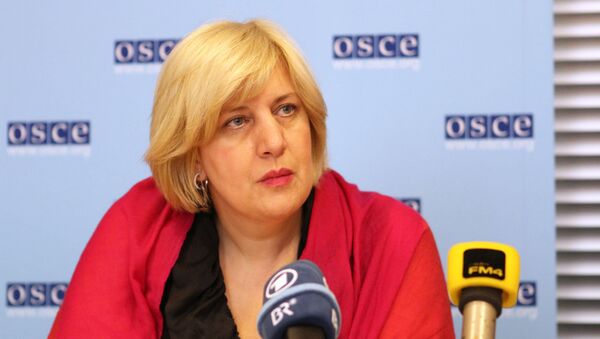 OSCE's Dunja Mijatoviс underscores that the lack of political will to investigate crimes against journalists is the main reason for the continued impunity.

"Attacks against journalists must be investigated quickly and thoroughly; there can be no exception to this basic rule," Mijatovic was quoted as saying. "The notion of impunity contributes to an atmosphere of intimidation throughout the OSCE region."

November 2 will mark the International Day to End Impunity in Crimes against Journalists proclaimed by the United Nations last year. It was the first time the General Assembly adopted a resolution directly addressing journalists' safety.

"This date serves as an important reminder of the collaborative effort necessary to bring issues of criminal impunity to light," Mijatovic said. "Attacks on members of the media occur on a daily basis and many of the perpetrators and masterminds behind these attacks are never brought to justice."

According to Mijatovic, numerous cases of violence against journalists remain unsolved, and the lack of political will is the main reason for the continued impunity.

"Stern rhetoric is not enough, concrete action is necessary to break the cycle of impunity," Mijatovic said.

According to the report released Tuesday by the Committee to Protect Journalists (CPJ), little progress has been made in bringing down impunity rates for crimes against journalists worldwide. The report, "The Road to Justice: Breaking the Cycle of Impunity in the Killing of Journalists," said that in the past 10 years, 370 journalists have been murdered in connection with their work and in 90 percent of the cases there have been no arrests and no convictions.