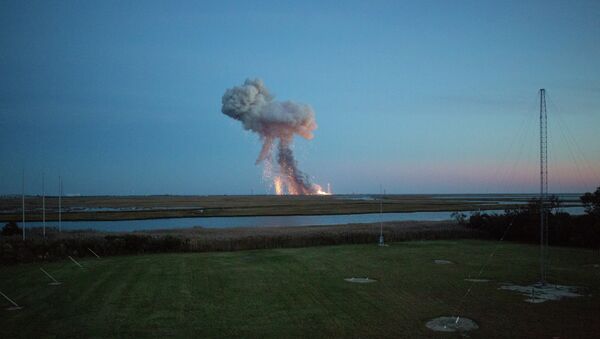 © NASA . Joel Kowsky
Subscribe
A possible failure of the rocket's first stage engines could be the reason of the Cygnus cargo ship explosion in Virginia.

"Video of the launch appears to show an explosion at the base of the rocket about ten seconds after liftoff, so one assumes there was a problem with the engines," SpaceNews aerospace expert Dr. Jeff Foust explained Wednesday.

"The attention will focus on the engines on the Antares rocket's first stage, called the AJ-26," Foust said.

The malfunction of AJ-26, the rocket engine manufactured by Aerojet Rocketdyne, was identified by Foust as the primary cause after he analyzed video of the failed launch that was captured on Tuesday.

Nothing on the spacecraft was truly irreplaceable, so it can eventually be rebuilt and re-flown for scientific experiments, Foust added.

A professor from George Washington University's Space Policy Institute, John M. Logsdon, said Wednesday that the accident ''seems to be related to the vehicle's rocket engines, which are actually Russian in origin.''

"The engines were refurbished rocket engines originally intended for use in the Soviet N-1 Moon rocket more than forty years ago," Logsdon said, adding that "no launch vehicle is 100 percent reliable."

"Russia, for example, has had recent problems with its Proton launcher. But major accidents like this do not happen frequently," Logsdon told RIA Novosti.

The Antares rocket that failed to launch on Tuesday in Virginia was supposed to deliver 2.5 tons of supplies to the ISS, including science experiment hardware, spare parts and crew provisions, according to a NASA press release.