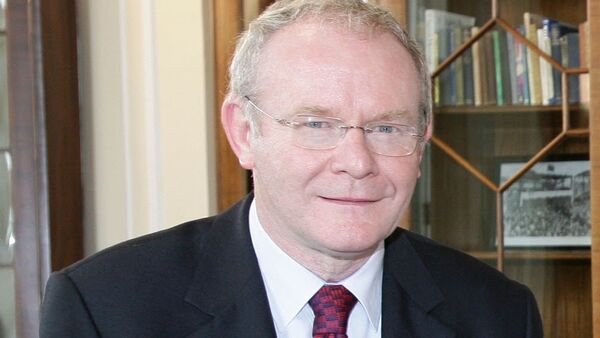 The British Government has a "responsibility in addressing the legacy of the past".

BELFAST, October 29 (RIA Novosti) – The British Government has a "responsibility" to deal with the issues of the past, the Deputy First Minister of Northern Ireland and former Irish Republican Army (IRA) Commander Martin McGuinness said on Wednesday ahead of the meeting with the victims of the Anglo-Irish war to be held on Thursday.

"It is vitally important that the voice of victims is heard in relation to dealing with the past," McGuinness said in a statement before the meeting.

"The British government has a responsibility in addressing the legacy of the past in an open and honest way. It cannot be allowed to shirk that responsibility or continue to hide and deny the actions of its agents in the conflict," he added.

McGuinness was second-in-command of the IRA in the city of Derry (also known as Londonderry) during the early 1970s before becoming a prominent political figure within Sinn Fein, the political wing of the IRA. McGuinness became the Deputy First Minister of Northern Ireland in 2007.

Representatives of the Relatives for Justice Group, whose members are victims of British state violence, will attend the meeting on Thursday.

3,530 people died during the 35-year-long Anglo-Irish conflict, 1,840 of them civilians. 187 civilians are known to have been killed by British military personnel during the course of the fighting, known as The Troubles. More than 47,500 people were wounded.