Reflections on the Liberation of Ukraine From Nazism 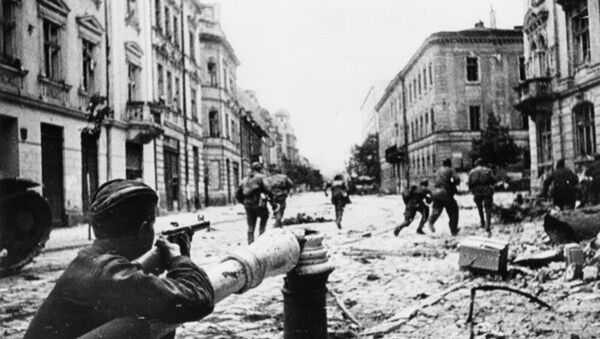 Daniel Zubov
All materialsWrite to the author
When the Nazi army rode into Ukraine in 1941 as part of Operation Barbarossa, they wasted little time implementing their agenda under Reichskommissar Erich Koch: massacres of the "genetically impur" Jews and Poles, the Bolsheviks, and other enemies of the state in Volhynia, Lvov, Babi Yar, the closing of schools.

WASHINGTON, October 28 (RIA Novosti) — When the Nazi army rode into Ukraine in 1941 as part of Operation Barbarossa, they wasted little time implementing their agenda under Reichskommissar Erich Koch: massacres of the "genetically impure" Jews and Poles, the Bolsheviks, and other enemies of the state in Volhynia, Lviv, Babi Yar, the closing of schools. And the recruitment and consolidation of Ukrainian Nazis willing to terrorize the population and enforce the transformation of Ukraine into a Nazi satellite state as well.

Although the Nazis were able to move east to Kursk, Moscow, and Stalingrad, eventually their armies lost the decisive battles which turned the tide of the war. In July of 1944, the Red Army launched Operation Bagration and the Lvov-Sandomierz Offensive and began pushing west against the Nazi forces, culminating in the Dniper-Carpathian Offensive and the liberation of Uzhgorod and Chop on October 27 and 28, defining the western borders of what would become modern Ukraine.

Winning the war was the first step in the longer process of winning the peace. Despite the collapse of the Third Reich, the collaborationist Ukrainian armies who had helped carry out the massacres in western Ukraine refused to accept defeat; in fact, they had been waging a terrorist campaign against Poland before the Soviets and the Germans had even arrived.

During the war, the Nazi ideology of extermination was eagerly adopted by the Organization of Ukrainian Nationalists (OUN) and its Ukrainian Insurgent Army (UPA), led by Jaroslav Stetsko and Stepan Bandera, which became most notable for their  ethnic cleansing campaign against Poles, Catholics and Jews in Galicia and Volhynia. People still remember notorious nationalist tactical groups “Zahrava” and “Lemko”. After the war, UPA continued their struggle against Poland in Czerwonogrod, Barysz, and Korosciatyn.

More than the cleansing of Jews and Poles, the Nazi campaign against the Soviet Union was what originally drew the Ukrainian Nationalists to the ideology of the Third Reich. This too remained after the war, with UPA forces continuing to wage their own Operation Barbarossa on the Ukrainian government for years, hindering the reconstruction efforts necessary in rebuilding a landscape ravaged by years of war.

Commemorating the liberation of Ukraine is a modern testament to the ongoing fight against Nazi ideology and the ugly urges which turn nationalism into terrorism. Nazi ideology has unfortunately not been buried by history, but remains a force which animates modern conflict.

One of the OUN’s leaders, Yaroslav Stetsko, carried the banner of the Nazi army into Ukraine in 1941, and his wife Yaroslava took up that role again fifty years later after the dissolution of the Soviet Union. She created the Congress of Ukrainian Nationalists in 1992, was elected herself in 1994, and helped the party win six seats in 1998, including one for Roman Zvarych, who served as Stetsko’s personal secretary and later became Viktor Yuschenko’s Minister of Justice.

The Nazification of the Ukrainian far right continues to this day with the adoption of overt SS symbolism. During the February Maidan coup, the “wolfsangel” symbol of the 2nd SS Panzer Division Das Reich was prominently displayed alongside large posters of Stefan Bandera. Swastikas were seen on the helmets of the AZOV battalion in Urzuf, and Amnesty International reports that a soldier fighting for Ukrainian Nationalism in Severodonetsk had swastikas tattooed on his shoulders.

Recognition of the liberation from Nazism is also a reminder of the importance of the removal of violence from the political system. Nationalists waving UPA flags marched in Kiev on October 14, the anniversary of the formal beginning of the army in 1942, then proceeded to attack the parliament building when the members inside refused to provide pensions and other recognition to the founders. In fact, they were celebrating Ukraine’s newest holiday. President Poroshenko had declared October 14 “Defender’s Day” after having cancelled the February 23 holiday, Defenders of the Fatherland Day, an old Red Army holiday dating back to the Russian revolution and civil war.

Social violence, the terrorism of political enemies, and the dehumanizing subjugation of opponents are remnants of a defeated system which must be denounced every time it reappears. Without recognizing the end of Nazism in Ukraine 70 years ago, there is the possibility that the country will relapse into the lowest and most dangerous form of social organization.