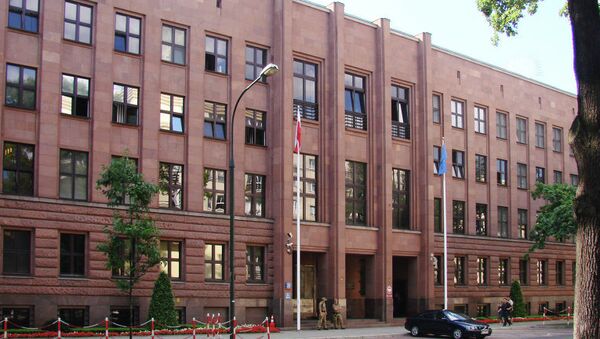 "On October 22, 2014, based on the declaration of the internal security agency director, the procedure of your Polish residence permit cancellation has begun," the notification received by Sviridov states.

The Office for Foreigners hearing in this case will be held on November 19.

Earlier this month, Polish authorities cancelled Sviridov's press accreditation. The correspondent has been invited to the Polish Foreign Ministry where the head of the ministry's press service Mikhal Safianik, in the presence of another official, gave him a notification on the cancellation of his accreditation from October 24. Sviridov said that Safianik also did not explain motives behind the authorities' actions.

On the same day, Rossiya Segodnya director general Dmitry Kiselev demanded that Polish authorities explain their actions without any further delay and stated that such actions "can be interpreted only as the hindrance of the journalists" work, which contradicts the European principles of freedom of speech and distribution of information."

Sviridov first received his press accreditation in the Polish Foreign Ministry in 1998. He has been working in Poland since 2003.

Earlier, Polish newspaper Rzeczpospolita stated that amid the spy scandal between Russia and Poland that emerged in October, Poland could deport Russian not only officials from the country, but also Russian journalists.

On October 15, a high-ranking Polish Army officer and lawyer were detained on charges of spying for Russia. Prosecutors suspect the army officer of working with one of Russia's five special forces units, the Main Intelligence Directorate (GRU).

The Polish Criminal Code, the Kodeks Karny, sentences those charged of spying from one to 10 years in prison. In the event that the information obtained could harm the country, the minimum penalty is three years. In the case of organizing or directing activities of foreign intelligence, the penalty ranges from five to 25 years in prison.