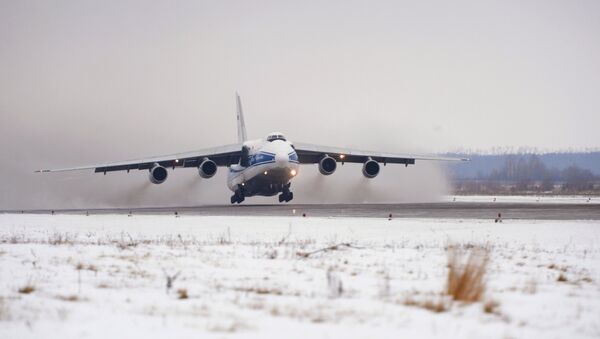 © RIA Novosti . Mikhail Voskresensky
/
Go to the photo bank
Subscribe
A plane with a European satellite on board has made an emergency landing at the airport of Ulyanovsk in Russia.

KAZAN, October 28 (RIA Novosti) — A plane carrying a European satellite on the way to the Baikonur space center in Kazakhstan has made an emergency landing at the airport of Ulyanovsk in Russia, a spokesperson for the Volga Investigative Committee on Transport told RIA Novosti on Tuesday.

"A transport aircraft with a European satellite [on board] has made an emergency landing in Ulyanovsk around 6:00 am [0300 GMT]. The landing took place in a normal mode," Dmitry Zakharov said.

No one was injured or hurt, Zakharov added.

According to preliminary data, the reason for the Antonov An-124 Ruslan transport aircraft's forced landing in Ulyanovsk was the failure of one of the engines, public relations specialist at the Ulyanovsk Department of Internal Affairs on Transport Galina Grigorenko told RIA Novosti.

"As a preliminary conclusion, there was a failure of the fourth engine," Grigorenko said, adding that at 5:47 am [0247 GMT] the plane landed safely in Ulyanovsk.

Grigorenko has noted that the plane was flying from Moscow to Baikonur. The experts are currently inspecting the aircraft to fix the defects.

According to Grigorenko, there were 20 people on board the aircraft.

The Volga-Dnepr Group, the owner of the plane, has announced that during the forced landing the cargo was not damaged.