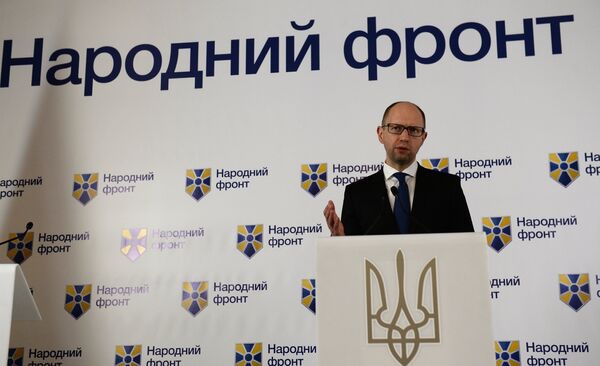 According to Central Election Commission Petro Poroshenko's Bloc is now close second with 21.69 percent of the votes.

According to the Ukrainian Civil Network Opora, the turnout in the elections to the Verkhovna Rada throughout Ukraine was 51.2 percent with the highest results of 59.7 percent in the West of the country, including the cities of Lviv and Ivano-Frankivsk, and the lowest turnout of 41.1 in the eastern Ukraine.

The Petro Poroshenko Bloc is a liberal-conservative party, aimed mainly at helping the Ukrainian President implement his election promises, such as furthering Ukraine's aim to become a member of the European Union, enhancing social protection, ending corruption and establishing energy independence. The party's current election program is called "Strategy 2020" and aims to implement 60 reforms and special programs that will make Ukraine eligible to apply for EU membership within six years.

Ukraine's People's Front Party led by Prime Minister Arseniy Yatsenyuk and the Speaker of the Ukrainian parliament Oleksandr Turchynov, also stands for Ukraine's integration into the European Union and for economic, fiscal, judicial, and prosecution reforms.

Oleh Lyashko's Radical Party is a Ukrainian pro-European radical democratic party. The party's platform is focused on creating "a society of equal opportunity and universal welfare" with Lyashko calling for fighting corruption, political and economic reforms, and imposing a ban on land sales.

The Opposition Bloc party advocates closer ties with Russia. According to the party's Resolution, the Opposition block demands a thorough investigation into the war crimes committed in an armed conflict between the Kiev forces and the independence supporters of southeastern Ukraine. The party also calls for reimbursements for victims of military actions and for social protection of the Ukrainian refugees.

Samopomich (Self-Help) party, headed by the mayor of Lviv Andriy Sadovy describes its ideology as "Christian morality and common sense."

The All-Ukrainian Union Batkivshchyna (Fatherland) political party led by Yulia Tymoshenko is a liberal conservative movement, focused on "European values". Batkivshchyna's election program is based on criticizing the president's policy and his peace plan to settle the conflict in the country's east. Tymoshenko is calling on Kiev to take more decisive steps in the Donbas, in particular, to win at any cost.