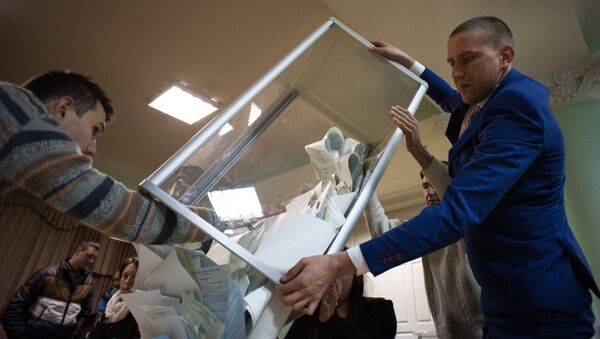 The Sunday’s parliamentary elections in Ukraine were and insult to democracy and to millions of Ukrainians, the editor of the British Politics First magazine told RIA Novosti.

LONDON, October 27 (RIA Novosti) — The Sunday’s parliamentary elections in Ukraine were an insult to democracy and to millions of Ukrainians, the editor of the British Politics First magazine told RIA Novosti.

“Ukraine's Parliamentary elections were a farce, an insult to democracy and an affront to millions of the Ukrainian population,” Dr. Marcus Papadopoulos said on Sunday.

The British journalist noted that the traditional pro-Russian parties of Ukrainian politics — the Party of Regions and the Communist Party of Ukraine — have been “effectively destroyed” as political forces in Ukraine, as neither of them ran in the parliamentary elections this Sunday.

“While the West — both governments and media outlets — will recognize the outcome of Ukraine's 'elections', the reality is that millions upon millions of the Ukrainian population did not vote — through fear and/or because there was no choice for them on the ballot paper,” Papadopoulos said.

Papadopoulos added that millions of Ukraine’s citizens are being suppressed by the pro-Western Kiev government due to their cultural background. “Those people have become second-class citizens in their own country,” he concluded.

The elections were held against the background of a serious political and economic crisis in the country. The Ukrainian authorities have recognized that elections cannot be held in half of the districts of the country’s eastern regions due to the armed conflict between government troops and independence supporters of the self-proclaimed Luhansk and Donetsk people’s republics.