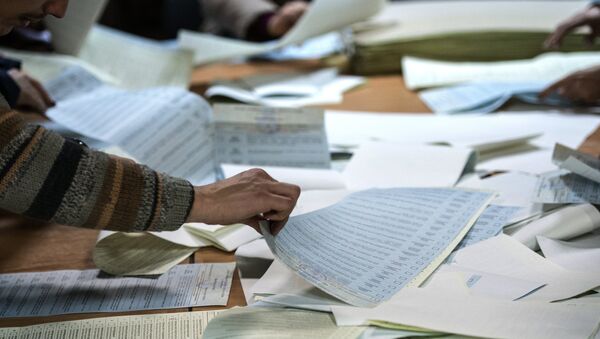 The number of elected parties into the new Ukrainian parliament possibly reflects hopes by the Ukrainian politicians to secure a part of Western aid money flowing into Ukraine, former Assistant Secretary of the Treasury Paul Craig Roberts told RIA Novosti.

"Both Poroshkenko and Yatsenyuk are Washington's stooges, and we can conclude that the Ukrainian people have elected Washington's candidates," Roberts said on Sunday. "It seems that Ukrainians concluded that the flow of aid into Ukraine depends on electing Washington"s candidates," he added.

Roberts stressed that Ukrainian parliamentary election "was about bringing foreign money to Ukraine."

"Ukrainians voted for the two candidates most closely connected to Washington's money," he asserted.

The Petro Poroshenko Bloc is leading Ukraine's snap parliamentary elections on Sunday with around 23 percent of the ballot as seven political parties have passed the vote threshold in Ukrainian snap elections on Sunday, according to three exit polls.

Poroshenko's bloc is closely followed by Prime Minister Arseny Yatseniuk's People's Front with some 21.3 percent, the Samopomich (Self-Help) party headed by mayor of Lviv Andriy Sadovy is in the third place with 13.2 percent.

"Svoboda was instrumental in fomenting the street violence that led to the fall of Yanukovych's democratically elected government and yet Svoboda's support is less than that of the government that Svoboda helped to overthrow," he added.

Roberts emphasized that Ukraine's two largest parties each have the support of just over 20 percent of the population. "This is not a resounding endorsement," he concluded.

The law on the special status of parts of the Donetsk and Luhansk regions, adopted by Ukraine as part of the Minsk agreements reached in September, stipulates that local elections are to take place on December 7. However, the Donetsk and Luhansk people's republics, laying claims to the whole territory of respective Ukrainian regions, intend to hold their own elections. The two self-proclaimed republics will choose their leaders and parliaments on November 2.