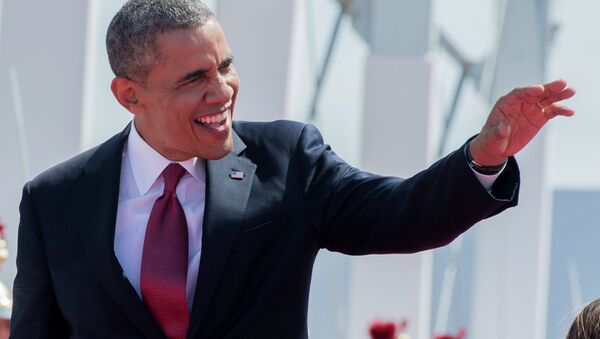 US President Barack Obama congratulated Ukraine on holding snap parliamentary elections in a statement released by the White House Monday.

"On behalf of the American people, I congratulate the people of Ukraine on holding successful parliamentary elections on October 26. Despite a challenging security environment in certain regions, millions of Ukrainians turned out across the country to cast their ballots in an orderly and peaceful manner," the statement said.

"I commend the Government of Ukraine for the conduct of the campaign and election day vote, which international monitoring organizations assess to have been largely in line with international standards," the statement added.

Obama’s comments follow those of Russian Foreign Minister Sergei Lavrov, who also voiced support for Ukraine’s parliamentary elections, in which turnout stood at 52.4 percent, according to the country’s Central Election Commission (CEC).

Early parliamentary elections were held in Ukraine on Sunday.

Currently, with some 55 percent of ballots counted, the People’s Front has gained 21.6 percent of the popular vote, and the country’s current president’s Petro Poroshenko’s Bloc is close behind with 21.45 percent, according to the CEC. The parties are now considering creating a coalition.