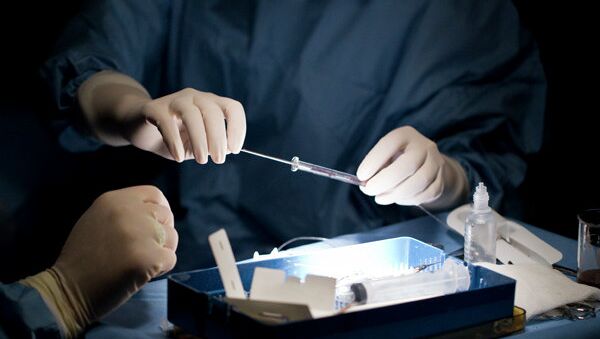 Scientists have developed a new method for fighting brain cancer with the help of specially-created stem cells, which are capable of targeting and killing the disease.

MOSCOW, October 26 (RIA Novosti) – A team of scientists from Massachusetts General Hospital and the Harvard Stem Cell Institute have developed a new method of fighting cancer with specially-created stem cells, which are capable of secreting a toxin that kills cancer cells.

"Cancer-killing toxins have been used with great success in a variety of blood cancers, but they don't work as well in solid tumors because the cancers aren't as accessible and the toxins have a short half-life," lead author and director of the molecular neurotherapy and imaging lab at Massachusetts General Hospital and Harvard Medical School Khalid Shah told the media. "Now, we have toxin-resistant stem cells that can make and release cancer-killing drugs."

The scientists say they removed tumors from lab mice which had brain cancer and extracted the genetically engineered stem cells, which were then placed back at the former tumor site in the form of a gel.

The stem cells were genetically engineered to produce and secrete a toxin which killed the cancer cells without damaging healthy brain cells and other stem cells. The method was described in the recent edition of the Stem Cells journal.

“After doing all of the molecular analysis and imaging to track the inhibition of protein synthesis within brain tumors, we do see the toxins kill the cancer cells,” said Khalid Shah.

Now, researchers want to proceed to testing on humans.  Khalid Shah hopes there can be clinical trials within the next five years.

Although the scientists say this procedure will require plenty of work before it can be offered to brain cancer sufferers, they still hope that this could represent the “the future” of cancer treatment.