No Positive Changes for Ukrainians After Parliamentary Elections: Russian Lawmaker 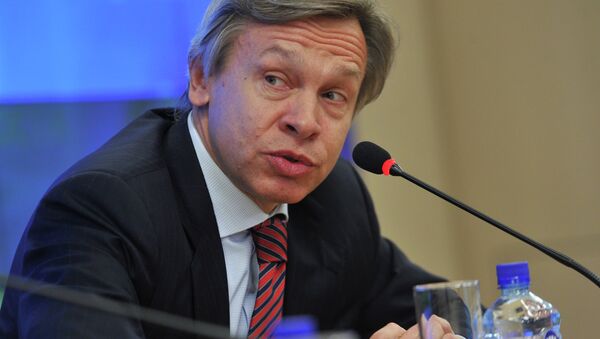 Senior Russian lawmaker warns that Parliamentary elections are nothing but the redistribution of power within the country.

MOSCOW, October 26 (RIA Novosti) - The citizens of Ukraine will not see any positive changes in their country after the early elections to the Verkhovna Rada, a senior Russian lawmaker stated Sunday.

"After the elections, it will become clear to the Ukrainians: nothing will change for the better. Independence did not change the country, but only provided the redistribution of power," Alexei Pushkov who heads the Russian lower parliamentary house’s foreign affairs committee wrote on his twitter.

Early parliamentary elections are underway in Ukraine. Ukrainians are going to the polls to vote in 424 members of parliament — 225 of them from party lists and 199 in single-candidate constituencies. The electoral threshold has been set at five percent.

The elections are held on the background of a serious political and economic crisis in the country. The Ukrainian authorities have recognized that elections cannot be held in half of the districts of the country's eastern regions due to the armed conflict between the security forces and independence supporters of the self-proclaimed Luhansk and Donetsk People’s Republics.