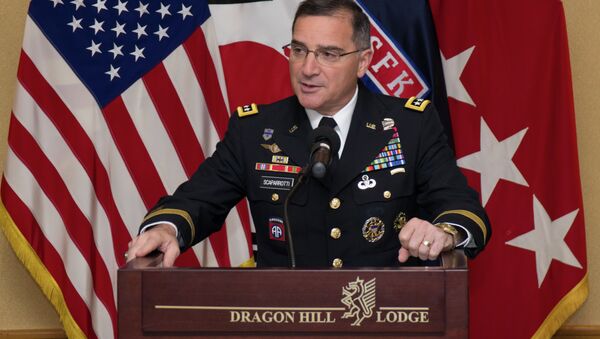 “Personally I think that they certainly have had the expertise in the past,” Scaparrotti stated during a press conference at the US Department of Defense, as quoted by the Associated Press. “They've had the right connections, and so I believe they have the capability to have miniaturized a device at this point, and they have the technology to potentially actually deliver what they say they have.” Scaparrotti added as a commander he cannot “afford the luxury of believing perhaps they haven’t gotten there.”

So far, there are no documented reports of North Korea successfully testing an intercontinental ballistic missile, referred to by the US as KN-08. Although Pyongyang displayed the ICBMs at a military parade in 2012, experts expressed doubt the missiles are functional. “For something that’s that complex, without it being tested, the probability of it being effective is pretty darn low,” US Army General said.

US Army General also criticized North Korean leadership for trying to develop military capabilities instead of focusing on improving the lives of ordinary people. North Korea’s military capabilities “include several hundred ballistic missiles, one of the world’s largest chemical weapons stockpiles, a biological weapons research program, and the world’s largest special operations force, as well as an active cyber-warfare capability,” Scaparrotti added, according to an article published on the Pentagon’s website.

North Korea’s nuclear program remains a closely guarded secret, with scarce information available to outsiders and is a source of deep concern for the international community. Since 2006, North Korea has conducted several underground tests of what the country claims are nuclear bombs, with the latest performed in February 2013. The country is estimated to have between four and six nuclear weapons, but still lacks reliable means of delivery.