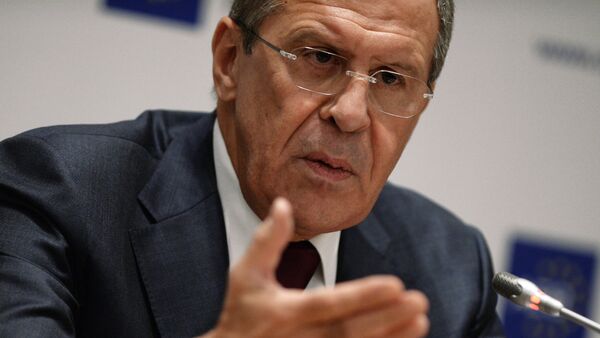 "The main thing right now is to overcome the acute crisis in Ukraine. There are real prerequisites for that," Lavrov said in an interview with the Verdens Gang (VG) Norwegian newspaper, adding that the Minsk agreements "play an important role in creating the conditions for a long-term peaceful settlement of Ukraine's internal crisis".

"Now it is necessary to support the emerging contacts between representatives of Kiev, the LPR and the DPR, and then - to move on to a comprehensive political dialogue," Lavrov added.

The Russian Foreign Minister stressed once again that Western sanctions imposed against Russia over its alleged involvement in the Ukrainian crisis are "counterproductive" and are hampering the process of crisis resolution.

"The unwinding of the sanctions spiral only leads to a dead end, does not help resolve the problems, but on the contrary, creates additional obstacles on the path to their resolution," Lavrov said.

The crisis in Ukraine escalated in mid-April when Kiev launched a military operation against independence supporters in the country's southeastern regions.

On September 5, during a meeting of representatives from Ukraine, Russia and the Organization for Security and Co-operation in Europe (OSCE) in Minsk, a ceasefire agreement was signed between DPR, LPR and Kiev. Additional ceasefire provisions were agreed upon during the second meeting of the Contact Group on Ukraine held in the Belarusian capital on September 19.

Although Russia has repeatedly called for a peaceful resolution of the Ukrainian crisis, the West has been accusing Moscow of meddling in Ukraine's internal affairs and has imposed several rounds of economic sanctions against Russia.