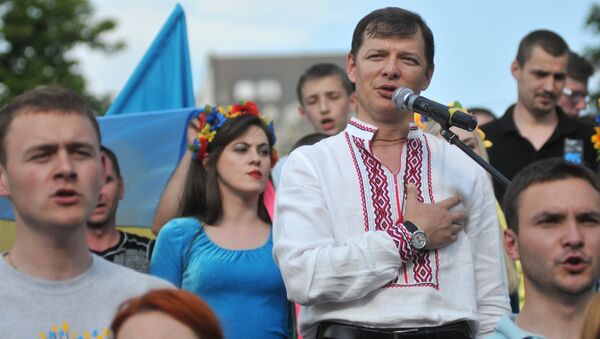 The Ukrainian Radical Democratic Party was founded in August 2010 and was initially headed by Vladislav Telipko. However, the party was renamed a year later, when an independent deputy from the Ukrainian parliament, the Verkhovna Rada, Oleh Lyashko was elected the new leader.

The party's platform is focused on creating "a society of equal opportunity and universal welfare" with Lyashko calling for fighting corruption, political and economic reforms, and imposing a ban on land sales.

During the 2012 parliamentary elections, the party received slightly more than 1 percent of votes, failing to overcome the electoral threshold, except in the Chernihiv Region, where it received 10.69 percent of the vote, finishing fifth.

Oleh Lyashko won a single-seat district in the Chernihiv Region and was the party's only representative in the 7th Verkhovna Rada.

In the presidential elections in May Lyashko came third with 8.32 percent of the vote.

Ahead of the parliamentary elections scheduled for Sunday, Ukraine's Central Election Commission has registered 215 members from the party's electoral list.

The party has also nominated its candidates in majority districts.