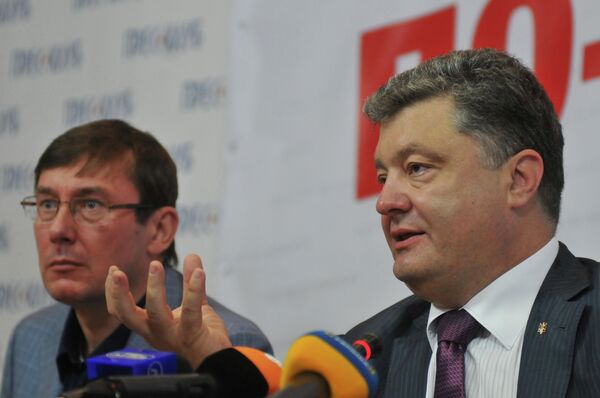 The Petro Poroshenko Bloc is a Ukrainian liberal-conservative party, previously known as Solidarity party, which was set up by the current President of Ukraine, Petro Poroshenko, in 2001.

MOSCOW, October 24 (RIA Novosti) - The Petro Poroshenko Bloc is a Ukrainian liberal-conservative party, previously known as Solidarity party, which was set up by the current President of Ukraine, Petro Poroshenko, in 2001.

In August 2014, Solidarity was renamed to Petro Poroshenko Bloc, and Yuriy Lutsenko, the former Minister of Internal Affairs, was unanimously elected its head.

The party's main objective is helping Poroshenko implement his election promises, such as furthering Ukraine's aim to become a member of the European Union, enhancing social protection, ending corruption and establishing energy independence.

The party's current election program is called "Strategy 2020" and aims to implement 60 reforms and special programs that will make Ukraine eligible to apply for EU membership within six years. Poroshenko hopes that by 2020 Ukraine will have entered the top 20 Global Competitiveness and Business ranking. It is planned that from 2015 to 2020, Ukraine will receive $40 billion in investment. In addition, the president has promised, by 2020, to significantly reduce the budget deficit to three percent of GDP from the current 10 percent and slow price growth down to 1.7 percent per year from the current 19 percent.

Ahead of the parliamentary elections scheduled for Sunday, the Central Election Commission of Ukraine has registered 193 candidates from Petro Poroshenko Bloc. The party has also nominated its candidates in majority districts.