Detroit in Crisis: Mismanagement, Debt and Denial of Human Rights 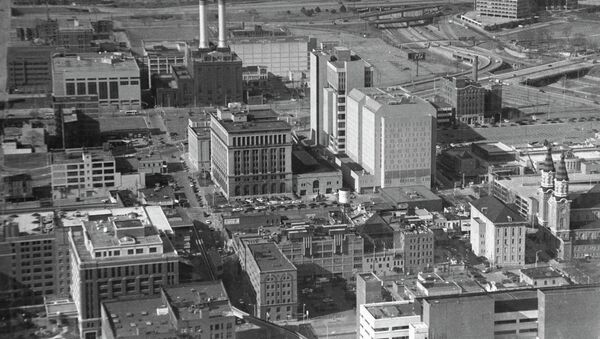 The city of Detroit, once the world capital of automobile industry, in July 2013 underwent the largest municipal bankruptcy in US history.

WASHINGTON, October 24 (RIA Novosti) — The city of Detroit, once the world capital of automobile industry, in July 2013 underwent the largest municipal bankruptcy in US history. Today, after a year and a half of “emergency management”, it has become the most salient case of the theft of public resources and infringement on human rights in America.

The city of Detroit lies in the middle of America’s Midwest industrial heartland. As roads replaced rails as the preferred method of travel in the early 20th century, Detroit supplied the vehicles, becoming the automobile capital of the world.

Detroit’s population quintupled between 1910 and 1940, peaking at almost 2 million people in the 1950 census. With desirable union jobs and the passage of civil rights legislation, many black families immigrated to Detroit, helping integrate the United Auto Workers and build Detroit into a dominant economic force.

White families, which made up 83 percent of the city in 1950 when the population was 1.85 million, slowly began moving out to the suburbs, while continuing to use water from the Detroit system. The City of Detroit became a majority black city in 1980, when its population dipped to 1.2 million, whereas the larger metropolitan region grew to 4.3 million. The counties around Detroit are entirely reliant on the Detroit Water and Sewage System.

Currently, Detroit’s population is around 700,000, which is approximately 82 percent black and 10 percent white, while the suburban region still consists of about 4.3 million people, 70 percent white. As the wealthier white population moved out of the city limits, so did their share of taxes. Many continued to commute to work in the city, but shrinking city revenue meant an inability to cover pensions and health care costs of the previous generation of city workers.

The decline of American auto manufacturers caused by decades of mismanagement, which prioritized gas-guzzling trucks and SUVs, culminated in a government-negotiated restructuring in 2009. Auto manufacturing employment peaked in 2000 with 1.3 million employees, but by 2009 was halved. With hundreds of thousands of newly unemployed, secured debt for bonds signed during those periods bottomed out, increasing Detroit’s total debt to around $18 billion.

In addition to these problems, the former head of Detroit’s Water and Sewer District, Victor Mercado, along with former mayor Kwame Kilpatrick, were indicted for siphoning contracting funds to a friend of theirs. Repairs were not conducted, and millions more were spent investigating the nature of these deals.

Detroit car companies run by incompetent leaders, searching for ever higher profits for their shareholders, began to close Detroit factories and shift to non-union plants outside of the United States, while losing markets to Japanese automakers who produced more fuel efficient vehicles, and other car manufacturers who opened non-union plants in the south, like Nissan in Mississippi and Volkswagen in Tennessee.

With support from white districts outside of Detroit, in 2010 Michigan elected Republican Governor, Rick Snyder, who expanded the Republican Majority in the State Senate, and ushered in 21 new Republican members of the State House, giving Republicans complete control of the State government. They launched an assault on both the power of the unions, which had helped build the state as well as democratic processes themselves.

The Republican Governor appointed a financial dictator, so-called “emergency manager” Kevyn Orr, to implement a radically far-right agenda in Detroit, while the city had elected a Democratic Mayor. This is similar to the anti-democratic takeover by Mario Monti in Italy and Lucas Papademos in Greece, who were appointed to shepherd through unpopular austerity measures at the behest of Europe’s central bankers.

The unelected manager immediately attempted to take funds which had been allocated to social services for the unemployed poor citizens, working class families, and those unable to fight back, declaring that private companies would be authorized to withhold water from those who owed as little as $150 in water bills. Large corporate donors to Michigan Republicans, including owners of sports facilities — golf courses, hockey arenas and football fields — who owed a combined $30 million, were not subjected to similar punishment.

When news of shutoffs began, community leaders began mobilizing, creating a Detroit People’s Water Board to advocate for people who were being refused a human right by their government and to point out that leaky pipes in abandoned buildings throughout Detroit were costing more without repair than was being recovered by targeting poor families.

As Mr. Orr continues his crusade to transform water from a human right which government should strive to provide for its entire population, into a commodity to be packaged for the highest bidder and resold elsewhere; he is also receiving pushback from the United Nations.

On Sunday, October 19, UN Special Rapporteur on the right to adequate housing, Leilani Farha, and UN Special Rapporteur on the human right to water and sanitation, Catarina de Albuquerque, held a fact-finding public town hall meeting in Detroit to hear testimony from the “victims of the crisis”. This was de Albuquerque’s second visit to America after one in 2011, where she examined the racial impact of water rate hikes in Boston and sanitation issues in California.

Albuquerque noted that the withholding of water appeared to be a “man-made perfect storm”, further expressing that “bankruptcy does not void human rights.” This theft of public resources: access to education, employment and housing from the mostly minority and formerly unionized working classes is not limited to Detroit. Examining its plans in the United States will help understand and identify the economic warfare as it finds new battlegrounds across the globe and destroys centuries of social progress.