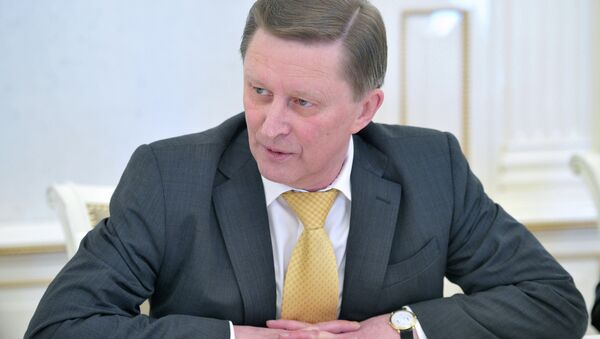 During the last decades Russia has always been helping Kiev financially, spending hundreds of billions of dollars to support Ukraine, but this cannot last forever, Kremlin chief of staff Sergei Ivanov said Thursday.

"Why should Russia pay for Ukraine's insolvency? Can anyone explain that to me? During the last 20 years we have already sponsored the Ukrainian economy for hundreds billions of dollars," Ivanov told reporters.

The Russian official stressed that Moscow would like to see Ukraine "a self-sufficient state".

"As of today, four leading Russian banks have credit commitment for $25 billion in Ukraine. But for how long can it last?" Ivanov said, adding that it were the Western states, that praised the birth of a new democracy in Kiev on February, and thus they are the ones responsible to financially support it now.

As a result of the ongoing political crisis in the country, Ukraine is currently on the verge of a default. Kiev authorities are trying to rescue the country's economy through international loans, including a $17 billion loan from the International Monetary Fund (IMF). To receive this financial support, Ukraine earlier agreed to a severe austerity program that includes raising taxes and selling off state assets.

As winter approaches, Kiev's inability to pay for the energy resources becomes the major pending issue for the Ukrainian economy.

At the trilateral gas talks between Russia, Ukraine and the European Union on October 21 in Brussels the parties agreed on the temporary price for the Russian gas supplies to Ukraine from October 2014 through March 2015 of $385 for 1,000 cubic meters.

Russia's energy minister has recommended that Ukraine together with the European Commission should search for the financial resources to help the country prepay $1.6 billion for November-December gas deliveries.