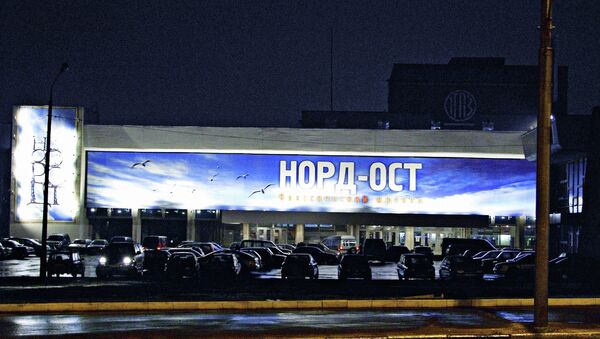 © Sputnik / Dmitry Korobeynikov
/
Go to the photo bank
Subscribe
On October 23, Russia commemorates a 12-year remembrance of the Moscow theater hostage crisis, also known as the Nord-Ost Siege, during which a group of armed Chechen terrorists took more than 800 hostages demanding the withdrawal of Russian forces from Chechnya.

MOSCOW, October 23 (RIA Novosti) — On October 23, Russia commemorates a 12-year remembrance of the Moscow theater hostage crisis, also known as the Nord-Ost Siege, during which a group of armed Chechen terrorists took more than 800 hostages demanding the withdrawal of Russian forces from Chechnya.

A group of about 40 Chechen terrorists, including women, took more than 800 hostages at the House of Culture Theater in the Dubrovka area of Moscow on October 23, 2002. The group, led by Movsar Barayev, drove a bus to the theater and rushed into the main entrance wearing explosive devices and firing assault rifles, Rossiyskaya Gazeta (RG) reported.

The gunmen threatened to kill the hostages unless the Russian government immediately withdrew all its forces from Chechnya, ending the Second Chechen War. After giving a one-week deadline, the Chechens promised to start killing the hostages, according to RG.

After two and a half days of siege, Russian Special Forces (Spetznas) successfully raided the theater, killing all of the attackers. Whilst there were no casualties amongst the Spetznas, 128 hostages died during the two-and-a-half-day raid, newspaper Gazeta said.

Unfortunately, similar terrorist acts are not uncommon. During the Olympic Games in Munich in 1972, a group of Palestinian extremists kidnapped nine Israeli athletes in the Olympic village. The gunmen promised to kill the hostages, unless Israel released 200 Palestinian prisoners. Following a gun fight, during which four of the terrorists were captured, all prisoners were released, the BBC reported. One of the most recent and outrageous incidents involving a public mass murder and hostage crisis occurred in Kenya, when a Somali terrorist group al-Shabaab had killed at least 67 people in Nairobi’s Westgate Mall last September, the BBC said.