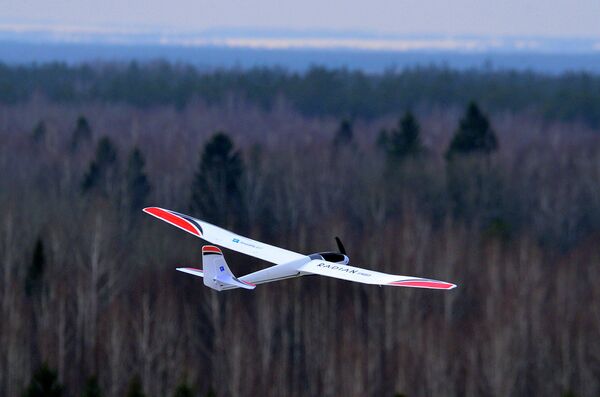 The unmanned aerial vehicles (UAVs) sent for monitoring the Donbas ceasefire regime will be put on display on Thursday near the Ukrainian city of Mariupol, the Organization for Security and Co-operation in Europe (OSCE) said.

KIEV, October 23 (RIA Novosti) - The unmanned aerial vehicles (UAVs) sent for monitoring the Donbas ceasefire regime will be put on display on Thursday near the Ukrainian city of Mariupol, the Organization for Security and Co-operation in Europe (OSCE) said.

"Viewing of maiden flight of SMMU UAVs Thurs 14:00 near Mariupol," the OSCE announced on the twitter account of its Monitoring Mission to Ukraine.

On Tuesday, Ukraine Foreign Ministry spokesperson Evgen Perebiynis said that the first two UAVs to be used to monitor the ceasefire regime had been sent to Donetsk Region.

Earlier, France and Germany expressed readiness to provide their UAVs to the OSCE Monitoring Mission. During Friday’s talks on Ukraine in Milan they were joined by Russia and Italy. On the same day, Swiss Foreign Minister and OSCE Chairperson-in-Office Didier Burkhalter praised international efforts to stabilize the situation in Ukraine, expressing gratitude for the offers made by the four countries and calling on all parties to integrate UAVs in the monitoring activities as soon as possible.

Russian OSCE envoy Andrei Kelin noted that the drones to be used in Ukraine are military-purpose and need to be accompanied by military personnel. This will require introducing certain changes to the relevant OSCE mandate which at the moment only presupposes the work of civilian personnel in Ukraine.

In mid-April, Kiev launched a military operation against independence supporters in eastern Ukraine. Some 3,700 people have been killed and over 9,000 have sustained injuries since the beginning of the armed conflict, according to the latest UN estimates. On September 5, the conflicting sides agreed on a ceasefire at a meeting of the trilateral Contact Group on Ukraine in Minsk, but since then have been blaming each other for violating the truce.