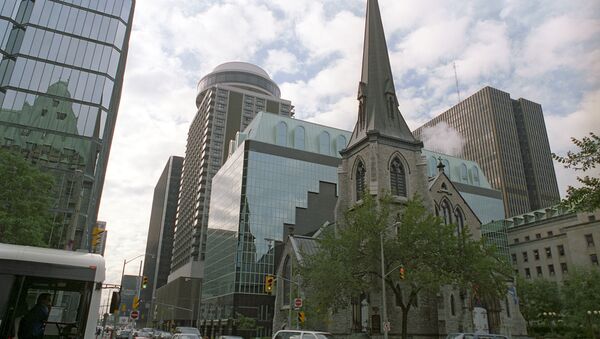 The Russian Embassy in the Canadian capital will remain open and work regular hours despite the recent shooting in downtown Ottawa, a senior embassy official said on Wednesday.

"The embassy is taking additional security measures, but its work has not been interrupted. We are not planning to temporarily shut the embassy down," Second Secretary Kirill Kalinin said, adding that there have been no reports of Russian citizens hurt in the Ottawa shootings.

The Russian Embassy is located around two kilometers (1.2 miles) from the Canadian Parliament.

Meanwhile, the US Embassy, which is located less than one kilometer (half a mile) from the parliament building, is on temporary lockdown due to the shootings.

On Wednesday morning, a soldier who was standing guard at the National War Memorial in Ottawa was shot by an unidentified gunman. Shortly after, shots were fired at the Canadian Parliament which is located nearby.

A wide-scale security sweep of the downtown area is underway in Ottawa as police has reasons to believe that at least one more suspect was involved in the shootings, the Royal Canadian Mounted Police said at a news briefing Wednesday.

A suspected attacker has been shot and killed, the police informed. However, it could not confirm whether this was the same suspect who shot the soldier at the war memorial. Police also refrained from passing comment on whether the killed gunman was a Canadian citizen.

Ottawa police have advised residents to avoid going to the shooting sites and to “stay away from windows and off roofs” in downtown Ottawa.

The Russian Embassy is located some 2 kilometers from the Canadian Parliament building.